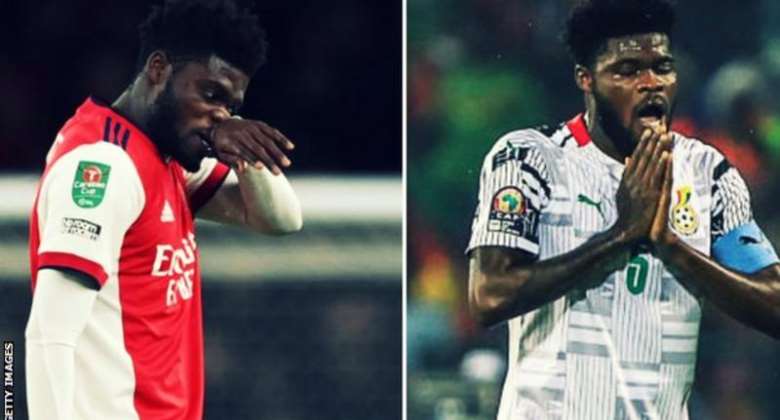 Arsenal's Thomas Partey says he will work to change his fortunes after a testing few days for club and country.

The 28-year-old came on in the 74th minute of Arsenal's EFL Cup semi-final defeat to Liverpool and was then booked and sent off between minutes 87 and 90.

His red card came two days after he played for Ghana in a shock group-stage defeat to Comoros that eliminated them from the Africa Cup of Nations.

"I am not happy with all that happened yesterday and at Afcon," he said.

"But I understand only with hard work things will change so I will continue to work hard to change this".

Ghana had not exited at the group stage of the Africa Cup of Nations since 2006. But the Black Stars failed to win any of their three games in this year's tournament. Their poor showing culminated in defeat to Comoros, the world's 132-ranked team and an island nation with less than a million inhabitants.

Midfielder Partey posted his message on Instagram after his two quick-fire bookings added to Arsenal's misery as they lost 2-0 on the night and on aggregate against Liverpool.

"I am responsible for anything that happened and will take all the critics," added Partey, who joined Arsenal from Atletico Madrid for £45.3m in 2020.

"I should be more intelligent not to get into a challenge when already booked. But this is my personality, I like to fight for every ball.

"I love this club and I love my country even though sometimes things don't happen how I wanted. I will continue to work harder and make things right.

"I will continue to give my all for the team when I am on the field of play because this is my life and this is what I choose to do."