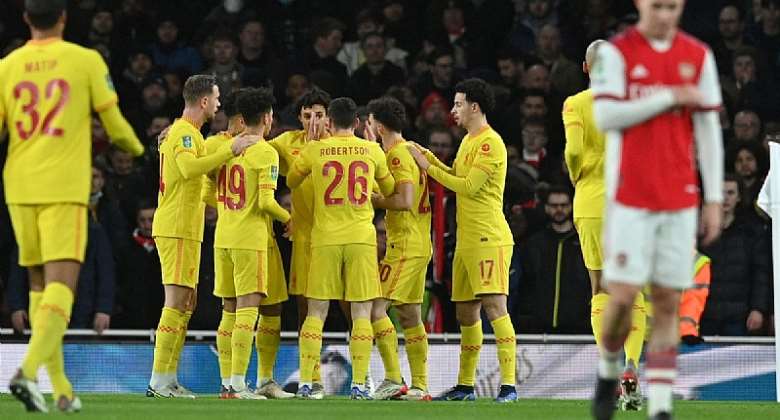 Liverpool have booked their place in the Carabao Cup final courtesy of a 2-0 win against Arsenal at the Emirates.

Mikel Arteta’s side managed not to concede in the first leg despite playing for over 70 minutes – injury time included – with 10 men after Granit Xhaka was sent off for flying in on Diogo Jota.

Somehow, with a full complement, they lasted for just under 20 minutes before going a goal down, Jota getting the better of Takehiro Tomiyasu out wide, cutting inside and deceiving Aaron Ramsdale with a scuffed shot from the edge of the area.

It was a gut punch for the hosts, who made an energetic start to the game and hit the crossbar through Alexandre Lacazette early on. Bukayo Saka had nipped in front of Andy Robertson to win a foul just outside the box, with Lacazette guiding the resulting free-kick on target only for Caoimhin Kelleher to touch the ball onto the frame of the goal.

There were signs that their defence might not be as cohesive as it had been at Anfield, however. Liverpool thought they had gone ahead with 12 minutes on the clock when Fabinho nodded down to Joel Matip at a corner and his teammate stabbed the ball into the back of the net, but the linesman’s flag went up before VAR confirmed that Matip had been narrowly offside.

The second half was end-to-end as Arsenal pushed hard for an equaliser. Liverpool continued to look dangerous, though, with Ibrahima Konate hitting the base of the post with a header after coming on for Matip at halftime.

The visitors wrapped up the win with just over 10 minutes to go, Jota running off the shoulder of Ben White and dinking over Ramsdale. While the goal was initially chalked off for offside, a VAR check showed that Jota was level and the decision was overturned. Cue wild celebrations in the away end, with Liverpool, now set to face Chelsea at Wembley next month.

Arsenal, meanwhile, contrived to end the night with 10 men once again, Thomas Partey earning two yellow cards within three minutes of each other on his return from the Africa Cup of Nations.