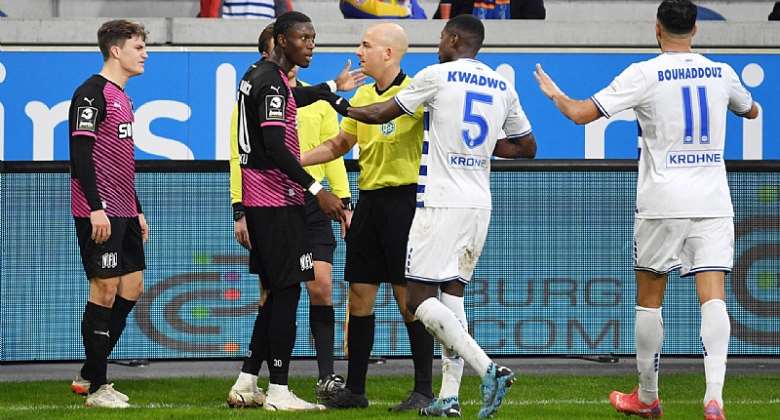 Police: There Was No Racist Insult (In The German Football League) Against The Osnabruek Player Opoku.

After the abandoned match in the Third Division between MSV Duisburg and VfL Osnabrueck, there has been a surprising turn of events. The police investigation did not confirm a suspicion of racism.

The Duisburg Criminal Investigation Department's State Protection Unit has provisionally closed its investigation into a spectator at last December's match. This was announced by the police on Thursday.

Meant another player and not Opoku

The statement said: It has been clarified that the 55-year-old suspect shouted "You monkey can't shoot a corner either", presumably referring to the player Florian Kleinhansl and not to Aaron Opoku." In addition, according to the police, the investigation did not confirm the suspicion that monkey sounds were imitated in the stands. The state security had previously analysed video recordings and questioned players, referees, spectators and stewards, the statement said.

Opoku, after the racism scandal:

"I was shocked by the incident''.

The VfL Osnabrueck footballer has spoken publicly for the first time. He expressed his gratitude for the solidarity he had experienced.

The file has now been handed over to the public prosecutor's office. At first, they only said that they had received the documents. A spokesperson announced that the case would be examined and then a public statement would be made.

Shortly before Christmas, the third league match had been stopped by referee Nicolas Winter in the 33rd minute with the score at 0:0. A novelty in German professional football. A spectator was accused of insulting Opoku from the stands. The players of VfL Osnabrueck, then felt unable to continue the match. Afterwards, there was a great wave of solidarity with Opoku, from football, politics and society.

Subject to a final and conclusive assessment by the public prosecutor's office, we are very relieved that at this point in time and according to the police investigation results published today, which unfortunately are not yet available to the MSV football team, the suspicion of racism has not been substantiated.

MSV Duisburg had announced on Wednesday evening. "We are relieved that with these preliminary results our values, our mission statement and our cosmopolitan city have not been permanently damaged."

After abandonment due to racism

Duisburg versus Osnabrueck to be replayed. Both third-division clubs had submitted a corresponding application to the DFB, but a specific date has not yet been set.