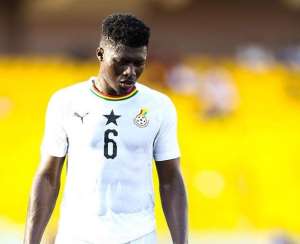 Fiorentina midfield enforcer, Alfred Joseph Duncan, has taken a swipe at the Ghana Football Association president, Kurt Okraku, for claiming he rejected a call up to the Black Stars.

Duncan declined an invitation to play against South Africa and Zimbabwe during the 2022 Fifa World Cup qualifiers last November due to personal reasons.

However, Milovan Rajevac excluded him from Ghana's final 28-man squad for the 2021 Africa Cup of Nations [AFCON].

And in an interview with Accra based Asempa FM on Thursday, the FA capo explained only players ready to play for Ghana were sent to AFCON.

"Alfred Duncan has had the opportunities to serve Ghana and he has not responded,” said Kurt Okraku.

“I don’t want to be picking on individual players but players who were ready to serve Ghana were selected to represent Ghana.”

However, Alfred Duncan responded with a tweet on Thursday afternoon, insisting his image is being tarnished and at the right time he will speak.

"People tarnishing my image in Ghana. I don’t want to start talking for Ghanaians to connect the dots so please let’s respect ourselves," wrote the former Inter Milan youth player.

Alfred Duncan has been in top form for Fiorentina this season, making 18 Serie A appearances and has two assists to his credit.