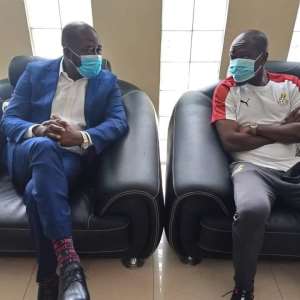 The President of the Ghana Football Association [GFA], Kurt Okraku has insisted that he has no regret sacking CK Akonnor as the head coach of the Black Stars.

Akonnor, a former Asante Kotoko and Hearts of Oak gaffer was named as the successor of the Kwesi Appiah in January 2020.

The 44-year-old was awarded a two-year deal by the Kurt Okraku led Ghana Football Association.

Akonnor led the Black Stars to book a place in the 2021 Africa Cup of Nations [AFCON] but after a shaky start to the 2022 Fifa World Cup qualifiers, the country's football governing body parted ways with the former AshantiGold SC head coach.

However, Milovan Rajevac was reappointed as Akonnor's successor on a one-year renewable deal.

The Serbian trainer was tasked to steer the team to win the 33rd edition of the AFCON in Cameroon.

However, the Black Stars have been eliminated from the ongoing tournament after finishing 4th in Group C with just a point.

Following the elimination from the tournament, the Ghana FA has come under intense pressure to sack the 63-year-old trainer.

But Mr Okraku quizzed in an interview if he regret sacking Akonnor, the former MTN FA Cup Committee chairman said he harbours no regret sacking the former Black Stars captain despite the team's unimpressive performance.

Ghana suffered a defeat in their opening game against Morocco before being held to a 1-1 draw with Gabon.

The Black Stars in their final Group C game suffered a 3-2 defeat against debutants Comoros.

Meanwhile, the Ministry of Sports will hold a crisis meeting with the Ghana Football Association on Friday, January 21 following the Black Stars early exit from the tournament.