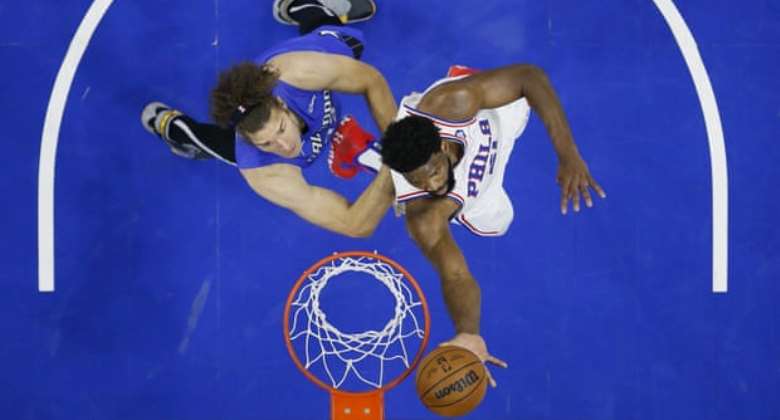 Joel Embiid matched his career-high score of 50 points as the Philadelphia 76ers beat the Orlando Magic 123-110.

The Cameroonian scored with 17 of his 23 shots from the floor and 15 of 17 free throws as the 76ers made it three defeats in a row for Magic.

Embiid, 27, joined Wilt Chamberlain and Allen Iverson as the only 76ers with multiple 50-point games.

"I was feeling great," Embiid said. "Just playing my game, just dominating like I've been doing all season."

Elsewhere, Nikola Jokic produced 49 points, 14 rebounds and 10 assists but it was team-mate Aaron Gordon who hit a three-pointer with two seconds of overtime left as the Denver Nuggets edged out the Los Angeles Clippers 130-128.

Jokic finished one point short of his career-high score and the Nuggets now sit sixth in the Western Conference, three places above the Clippers.

Giannis Antetokounmpo registered 33 points, 15 rebounds and seven assists as the Milwaukee Bucks beat the Memphis Grizzlies 126-114. The result ended the Bucks' two-game losing streak and was a first defeat on the road for Memphis since 23 December.

Chicago Bulls, leaders of the Eastern Conference, proved too strong for the Cleveland Cavaliers in a 117-104 win, with DeMar DeRozan delivering 30 points. Miami Heat, who sit second in the east, made it back-to-back victories with a 104-92 success at the Portland Trail Blazers.

Luka Doncic scored a season-best 41 points and made a crucial three-pointer with one minute remaining as the Dallas Mavericks made it four wins in a row with a 102-98 triumph against the visiting Toronto Raptors. The Mavericks have now won 10 of their last 11 matches.

Sacramento Kings' Terence Davis scored a career-high 35 points but missed a three-pointer with 16 seconds on the clock as his team lost 133-131 to the Detroit Pistons, who had trailed by 10 points with fewer than three minutes on the clock.

The Los Angeles Lakers went down 111-104 at home to the Indian Pacers. LeBron James scored 30 points for the Lakers but Pacers guard Caris LeVert scored 22 of his 30 points in the fourth quarter to help secure the win.

In one of Wednesday's thrilling games, Kyrie Irving scored 30 points and LaMarcus Aldridge registered 27 as the Brooklyn Nets edged out the Washington Wizards 119-118. The win keeps the Nets third in the Eastern Conference.

Dejounte Murray racked up 23 points, 14 assists and 10 rebounds in just three-quarters of play to lead a balanced San Antonio attack as the Spurs hammered the Oklahoma CityThunder 118-96.

Elsewhere the Charlotte Hornets beat the Boston Celtics, while the Atlanta Hawks beat the Minnesota Timberwolves and the Houston Rockets overcame the Utah Jazz.