Africa Cup of Nations: Five things we learned on Day 11 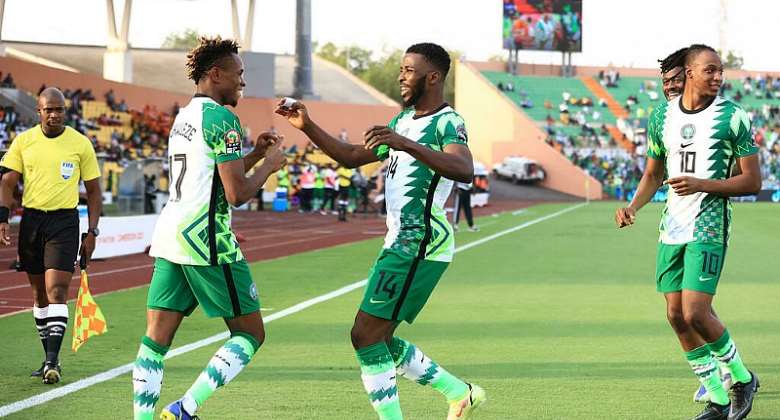 The Nigerians came to Garoua with some serious sounds in the stands as well as some pretty moves on and off the field.

It's worth turning up early
The Stade Roumdé Adjia in Garoua is a charming place. It holds only 25,000 spectators and when the majority of them are Nigerian, it can become a soundscape. A phalanx turned up about 90 minutes before kick-off against Guinea Bissau and made a pleasant enough sound over to the review's left. But with an hour to go, the artillery arrived. They deployed drums that would give the Kodo gang a run for their money and some weapons-grade brass. It was vibrant. It was visceral. And we can still hear it (because we recorded it). The fair of fans seemed reluctant to go home.

They'll be back
And they can come back quite soon for Nigeria's last-16 game in Garoua on Day 15. Nigeria are awaiting the identity of their next opponent. All will become clear after the final round of games in the group stages on Day 12.

The heat is on
No series of reviews during a big tournament process would be complete without some strained allusion to a film or song. Actually, the review wouldn't be the review at all without referring to itself. But that comes later. One Super Eagle-eyed journalist asked the Nigeria boss Augustine Eguavoen why he removed his jacket after 15 minutes of the encounter with Guinea Bissau with the score at 0-0. Was he feeling the pressure? Not in the slightest. "Actually, I thought it was going to be a lot colder," said Eguavoen temperately. "I took the jacket off because it was a bit hot. It was to do with the weather. No tension at all."

No sweat
Down in Yaoundé, Egypt were fighting for their Cup of Nations lives against Sudan. Unlikely though it was that Sudan would beat them and Nigeria would lose to Guinea Bissau, you just never know. Egypt won 1-0 to move on as runners-up of Group D. They will face the winner of Group E and that could be Cote D'Ivoire, Equatorial Guinea or Sierra Leone.

There's no business like Mo business
The Egypt coach Carlos Queiroz is under pressure because his team hasn't pulverized anyone 7-0 but yet somehow are still in the tournament. You mean 1-0 is three points too? Slaughters are expected because the Egyptians boast Mo Salah who is conjuring up wonder goals by the dozen when he is in Liverpool. But Queiroz isn't in a panic despite the fact that Salah has scored one of Egypt's two goals so far. Queiroz clearly spends his time looking out of the window and walking around. "We're living in a different world with Covid-19, a different society, a different football," he said. "The only thing that didn't change is criticisms for coaches." With that kind of social perspective, he can't last long as Egypt coach. "We're doing our best and people on TV or in the media criticise. This is part of the show, we need to be ready for this event."

A toast to the past
So Nigeria, unlike Egypt, are doing well. Who should take the credit? The interim coach Eguavoen says the former boss Gernot Rohr - who was sacked in December after five years in the job - should be hailed. "He's the one who put 98 percent of this team together," said Eguavoen. "So there's no way that we're going to leave Gernot Rohr out of this. He did a good job assembling the boys, it's just unfortunate what happened. And if we win the Africa Cup of Nations, it's not just me who will take the credit." Classy.