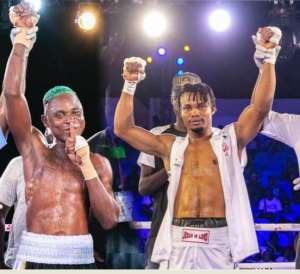 George (Red Tiger) Ashie and Robert Quaye aka Stopper have signed a fight contract with Box Office Sports Promotions for the 6th March 2022 bout which will be held at Bukom Boxing Arena.

The much-anticipated bout hopes to be an attraction as the two boxers have a large following.

George Ashie is a former African Boxing Union (ABU) super featherweight titlist and is reaching the climax of his career as he faces a very experienced and formidable opponent who is the current UBO champion.

The 38-year-old Ashie has 32 professional boxing wins with 24 by way of knockouts with 5 defeats, most of it being controversially acquired, and a solitary draw.

The 29-year-old is still unbeaten in his 20 professional boxing victories, 17 of those wins came by way of knockouts.

Robert is a former interim World Boxing Organisation Africa Super Lightweight titlist who had a shot at the current belt when Congolese Marios Motamba was the champion.