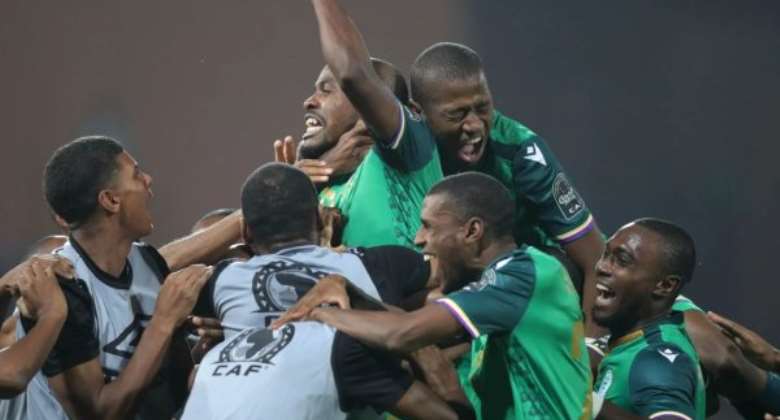 Three goals from debutants Comoros, coupled with Andre Dede Ayew's red card ended the Black Stars' desire of qualifying to the knockout stage of the 2021 Africa Cup of Nations (AFCON) in Cameroon.

The crucial match played at the Stade Rounde Adjia on Tuesday evening ended 3-2 in favour of the debutants to send Ghana packing from the biennial competition.

A brace from Ahmed Mogni and El-Fardou Mohamed and two goals from Ghana's Richmond Boakye-Yiadom and Alexander Djiku were not enough to secure the Black Stars a place in the round 16 stage.

Comoros' Ben Mohamed gave his side the opener in the 3rd minute following Daniel Amatey's blunder to slot in the first goal to end the first half 1-0.

Searching for the equalizer, Ghana's Kamaldeen Sulemana and Jordan Ayew's attempts at goal yielded no results against a side who stood solid in defence to prevent the Stars from penetrating.

Crystal Palace's Jordan collected a pass from on the left and weaved into the opponent's box to send a pass to Kamaldeen which was saved by goalie Boina Ben, however, Dede Ayew went in for a rebound but ended clashing with the goalie which gave him the sending orders from the Malian referee in the 25th minute.

The Stars, despite down by one man pushed for the equalizer which saw Thomas Partey being awarded a free-kick in the 39th minute but his shot hit the side.

From recess, Mogni, who plays in FC Annecy in France found the back of the net with a strike from the edge of the penalty box to register his name on the scoresheet.

Ghana's Daniel Kofi-Kyere sent in a fine cross from the corner which found Boakye-Yiadom to head straight into the top right corner of the goal post in the 64th minute before defender Djiku grabbed Ghana's second 13 minutes after.

The Black Stars urgently needed a win to determine a place in the next stage but it ended in tears when Benjaloud Youssouf put the ball on a plate for Mogni to bang in the goal from a close range to end the match 3-2 for Comoros.

This would be the first time since 2006 AFCON in Egypt that Ghana has been eliminated at the Group stage. Despite Comoros' win, they would join Ghana to exit the continental competition.

Ghana finished the competition with one point and at the bottom of Group C log after losing to Morocco, Comoros and drawing 1-1 with Gabon.