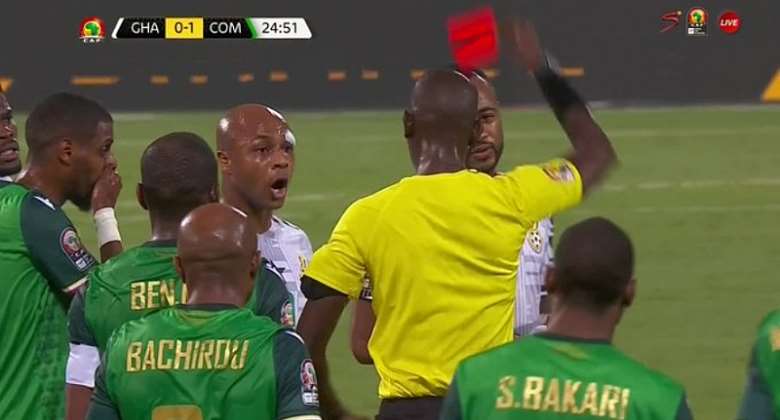 Andre Ayew has become the first Ghanaian captain to be sent off in the Africa Cup of Nations [AFCON] tournament.

The 31-year-old was sent off in Ghana's defeat to Comoros in the final Group C game on Tuesday night.

Andre Ayew was sent off in the 25th minute after Ayew tried to score but missed the ball.

However, the leg of Andre went straight to the arm of goalkeeper Salim Ben Boina.

After a Video Assistant Referee review, the Ghana captain was sent off.

The Black Stars were humbled by a 3-2 defeat to debutant Comoros. The defeat mean the West African country exited the tournament without winning a game.

El Fardou Mohamed Ben Nabouhane broke the deadlock on the 4th minute before Ahmed Mogni added a second just past the hour-mark.

However, goals from Richmond Boakye and Alexander Djiku levelled the game up for Ghana, but Mogni grabbed a winner for the tiny island nation with five minutes remaining.

It is the first time in their history that Ghana have failed to win at least one pool stage match having made 22 past visits to the Africa Cup of Nations tournaments.

Ghana currently sit 4th with just a point.
The Black Stars will be hoping to end its trophy drought in Ivory Coast during the 2023 AFCON tournament.