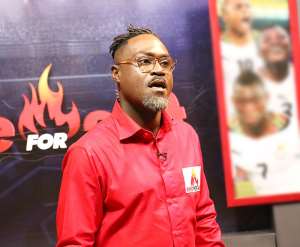 Andre Ayew’s 18 minutes goal put Ghana ahead, but Jim Allevinah equalised for Gabon after scoring a late goal in the second half. The game ended in a 1-1 draw after full time.

Reacting after the game, Countryman Songo, who said he was not happy with the result, insisted that Milovan Rajevac’s men lost concentration during the encounter against the Gabonese.

"The coach and GFA have failed as big-time. Why are they not giving the local players the chance to play look at Sierra Leone, Equatorial Guinea they all use local players and look at the wonderful performance they are showing up. Are you telling me Sierra Leone league is better than the Ghanaian Premier league?," Countryman Songo said after Ghana's game against Gabon.

He added, “The Black Stars needs to be reshuffled in order to bring in more local players”.

He described the team's performance as a disgrace to the nation and urged the Black Stars Coach to always make selections on his own without the influence of football authorities.

“Going forward, the coach should play Fatawu and Maxwell Abbey rather than playing some senior players who aren't willing to die for the country.”

The result against Gabon means Ghana are in the third position in Group C with 1 point from two games.

Ghana will now take on Comoros in their last Group C fixture on Tuesday.