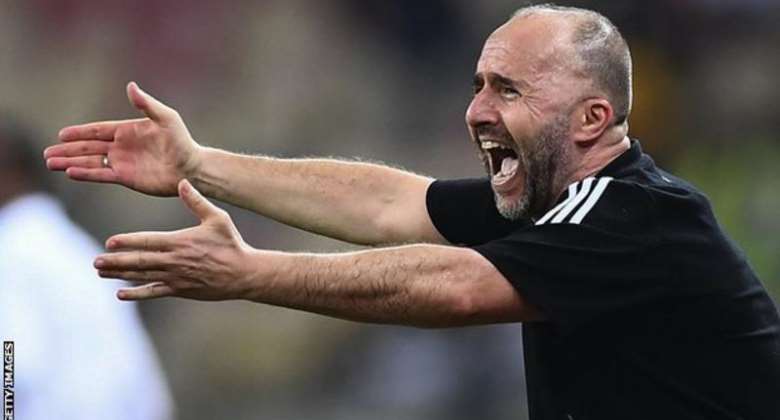 Algeria coach Djamel Belmadi admits his side are in a "really tough" situation after taking just one point from their first two matches at the Africa Cup of Nations.

The defending champions are bottom of Group E following their 1-0 defeat by Equatorial Guinea on Sunday.

The north Africans must win their final game against Ivory Coast on Thursday (16:00 GMT) to have a chance of reaching the last 16.

"I'll tell you that we are in a tough period, a really tough one."

The Desert Foxes had two goals ruled out for offside against Equatorial Guinea and could not find a way past goalkeeper Jesus Owonu, who made two saves from Youcef Belaili.

The defeat against a side ranked 114th in the world also ended Algeria's 35-match unbeaten run stretching back to October 2018.

"We created situations, I would say almost by the dozens if I'm not mistaken, none of the chances wanted to go in."

Algeria, captained by Manchester City forward Riyad Mahrez, are on the brink of a group-stage exit in Cmaeroon

Meanwhile, Algeria right-back Youcef Atal described the squad as a "family", which he said would pull together after defeat in a bid to reach the knock-out stages in Cameroon.

But their task will not be easy, with Ivory Coast top of the group on four points, Equatorial Guinea on three and Sierra Leone on two points - and all four sides still battling to qualify.

"We did everything, we gave everything," said Atal. "Sometimes you have difficult times like these. We have been working together for a while, we've been winning, playing good games.

The 25-year-old added: "We are like a family and now we are going through a difficult time, we are conscious of that.

"We will continue to work and we will give everything in the next game and [hopefully] we will qualify."