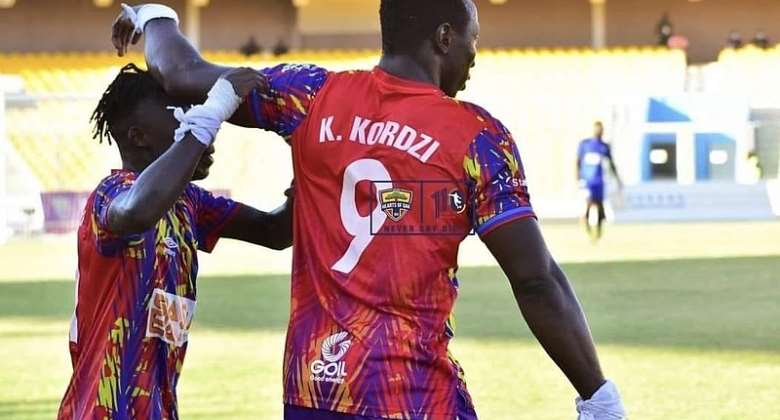 The matchday 13 games at the 2021/22 Ghana Premier League games has been ended at the various stadia with some impressive results.

Hearts of Oak returned to winning ways against Techniman Eleven Wonders at the Accra Sports Stadium.

Below is the full wrap up of matchday 13 games.
Champions Accra Hearts of Oak shook of their disappointment in midweek to beat Eleven Wonders 4-1 in their Match Day 13 Ghana Premier League fixture at the Accra Sports stadium.

The Phobians were dealt a blow on Wednesday following a 1-0 loss to Medeama SC in their outstanding Premier League match at the Akoon Park where striker Kojo Obeng Jnr. was shown a red card. Kofi Kordzi returned to the starting lineup to produce a masterstroke as he scored a brace to condemn the Techiman lads to their 7th defeat of the season.

Kordzie scored his brace in between Salim Adams’ opener in the 20th minute. Adams scored a thunderbolt to give Hearts a deserved lead as the first half ended 1-0 in favour of the champions.

Kordzi connected a cross from Salifu Ibrahim to increase the tally for three minutes after the break. The dominance of Hearts of Oak won them a spot-kick which was expertly converted by Kofi Kordzi to make it 3-0 following a foul on Daniel Afriyie Barnieh inside the box.

The goals were Kordzi’s sixth and seventh of the season one goal behind top scorer David Abagna who is on 8 goals.

The maker of the third became the scorer of the 4th as Afriyie Barnieh got on the score sheet after smashing home from close range before Mohammed Tetteh Nortey pulled one back in the 84th minute for Eleven Wonders.

In Tamale, Real Tamale United scored two first-half goals to beat Bibiani Gold Stars 2-0 at the Aliu Mahama stadium. Goals from Mustapha Fuseini in the 19th minute and Mohammed Sadat’s 24th-minute penalty were all the Northern giants needed to beat their fellow newcomers.

AshantiGold SC returned to winning ways as they smashed Elmina Sharks 4-0 at the Obuasi Len Clay Stadium on Sunday. The Miners went into the game fresh from a 3-1 loss to Asante Kotoko on Match Day 12 - extending their unbeaten run to six matches.

Elijah Addai scored in the 35t minute to give them the lead before Yaw Annor doubled the advantage for the home side three minutes after recess. Seth Osei added the third and fourth goals within 13 minutes to complete the rout. The intelligent attacker netted in the 71st and 84th minutes to ensure AshantiGold won in style.

In Accra, two time League champions Aduana FC came from behind to snatch a 1-1 draw against Accra Lions at the Accra Sports stadium. Daniel Awuni drew first blood for the home side inside three minutes. But Aduana Stars fought back into the game with a 40th-minute penalty converted by Yahaya Mohammed.

Two goals were produced in the opening five minutes of the match between WAFA and Dreams FC as both sides shared the spoils in a 1-1 stalemate at the WAFA Park at Sogakope. The Academy boys took the lead through Marvin Owusu. But Dreams FC levelled matters through Issah Ibrahim.

Medeama SC were held 0-0 by Accra Great Olympics at the Akoon Park at Tarkwa.

Earlier on Friday, Umar Bashiru scored two goals in either half to beat King Faisal 2-0 at the Baba Yara Sports stadium.

Fixtures for Match Day 13 would be wrapped up at the Accra Sports Stadium where Legon Cities hosts Bechem United on Monday, January 17, 2022.