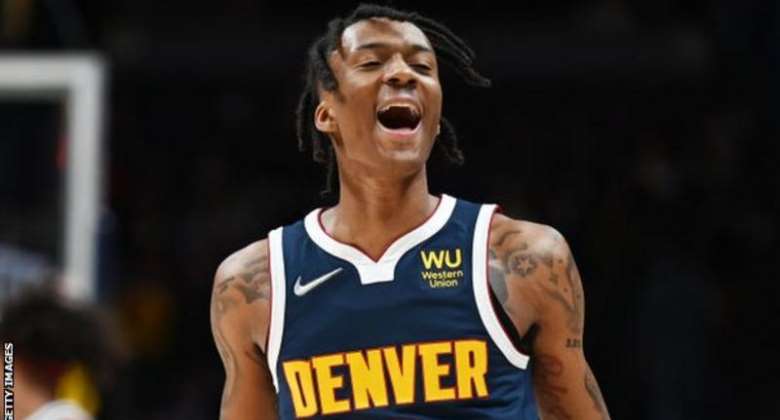 Bones Hyland scored a career-high 27 points and made 10 rebounds as the Denver Nuggets beat the Los Angeles Lakers 133-96 in the NBA.

Nikola Jokic added a triple-double - 17 points, 13 assists and 12 rebounds - at the Ball Arena in Denver.

LeBron James' 25 points and nine rebounds could not prevent a third consecutive defeat for the Lakers.

The 37-point defeat is the second heaviest of James' career, after a loss by 42 to the Indiana Pacers in 2019.

Pascal Siakam recorded his first triple-double of the season as the Toronto Raptors beat the Milwaukee Bucks 103-96.

Siakam finished with 30 points, 10 rebounds and 10 assists as the Raptors won a seventh game in nine, despite Giannis Antetokounmpo's 30 points and six rebounds for the Bucks.

The Philadelphia 76ers defeated the Miami Heat 109-98 thanks to Joel Embiid's 32 points and 12 rebounds, and Tobias Harris and Seth Curry scoring 22 and 21 points respectively.

Omer Yurtseven managed 22 points and 11 rebounds for the Heat, who had won their past four matches.

James Harden scored 27 points and made 15 assists and eight rebounds as the Brooklyn Nets overcame the loss of Kevin Durant to injury to beat the New Orleans Pelicans 120-105.

The Dallas Mavericks beat the Orlando Magic 108-92,while the Cleveland Cavaliers overcame the Oklahoma City Thunder 107-102.