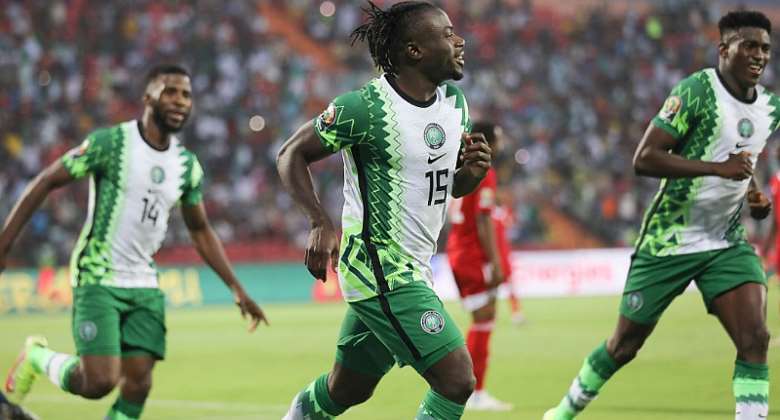 Nigeria have qualified for the last 16 of the Total Energies Africa Cup of Nations after they eased to a 3-1 win over Sudan in a Group D clash at the Roumde Adjia Stadium in Garoua on Saturday evening.

Goals from Samuel Chukwueze, Taiwo Awoniyi and Moses Simon secured all three points for the Super Eagles, with the result taking them to six points and guaranteeing them a top-two finish in the group.

The Falcons of Jediane scored their consolation via a penalty from Walieldien Khedr and will need a strong showing in their final game against Egypt next midweek to have a chance of advancing into the knockout phase.

Nigeria had the perfect start to the game when they claimed the lead in just the third minute: a long throw-in was controlled in the penalty area by Moses Simon, who teed up Samuel Chukwueze to score with a low, left-footed shot beyond Sudan goalkeeper Ali Abu-Eshrein.

Sudan looked for a quick reply and threatened on 10 minutes when Abdelrazig Omer burst into space on the right of the penalty area, but he was denied by a sliding challenge from Zaidu Sanusi.

That was as good as it got from an attacking point of view for the Falcons of Jediane in the opening 45 minutes, with the Super Eagles creating plenty of play in the opposite direction.

They came close to a second goal no less than three times in the 36th minute: Wiliam Troost-Ekong first met a free kick and was denied by Abu-Eshrein; a second phase of attack a few seconds later then had Taiwo Awoniyi hitting the post from close range; and the subsequent loose ball was almost forced over the goal line by Moses Simon until Mustafa Elfadni intervened with a clearance.

Yet Nigeria would not be denied a second, and they established a 2-0 lead on the cusp of halftime. Chukwueze’s cross from a free kick pin-balled between Troost-Ekong and Sudan’s Salah Nemer, before striking the head of Awoniyi, who unwittingly steered an effort into the back of the net – though Abu-Eshrein’s attempt at a save left much to be desired.

The start of the second stanza saw the Falcons of Jediane opt for a double change in attack, as Al-Jezoli Nouh and Dhiya Mahjoub came off the bench, while Nigeria opted to swap out Chukwueze (presumably to limit his chance of injury) and bring on Alex Iwobi.

The Super Eagles wasted no time in making it 3-0, scoring less than a minute after the restart, as Simon burst down the left and effectively ran onto his own lobbed ball over the defence before steering a controlled volley beyond the ‘keeper.

Sudan were given a lifeline just past the midway point of the second half when they were awarded a penalty: VAR urged referee Victor Gomes to check an incident between Ola Aina and Mustafa Karshoum, with the Nigeria defender guilty of a shirt pull and step on the Sudanese player’s foot.

Walieldien Khedr converted from the spot kick to reduce the deficit to 1-3 in the 70th minute.

However, the goal proved no more than a consolation for Sudan, who were unable to build any further attacking pressure, allowing Nigeria to throttle down in the dying minutes and cruise to a comfortable victory.

The teams will wrap up their Group D campaigns on Wednesday 19 January: Nigeria will face Guinea-Bissau in Garoua at the same time that Sudan take on Egypt in Yaounde.