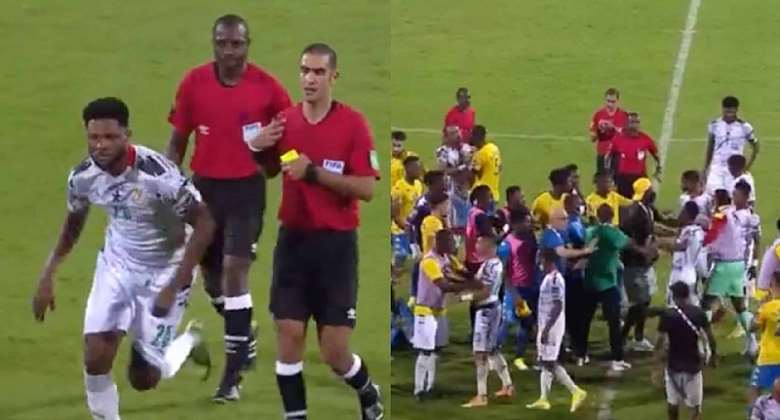 The Confederation of Africa Football (CAF) has announced that Ghana striker Benjamin Tetteh would serve one more ban in addition to the automatic two he is set to serve for receiving a red card in the game against Gabon.

The tall forward climbed off the bench to feature for the Black Stars on Friday night when the West African side played their second Group C match at the ongoing 2021 TotalEnergies Africa Cup of Nations (AFCON) tournament in Cameroon.

In a melee that ensued at full-time, Benjamin Tetteh was captured throwing a punch and ended up being red carded by the referee.

After reviewing the incident, a CAF Disciplinary Committee has ruled that instead of two matches, the Ghana forward should miss three games.

“CAF Disciplinary Board decided to:
“To suspend player Ghana player Benjamin Tetteh for one additional game match in addition to his automatic suspension of two matches. Consequently, the player has been suspended for three matches,” an official CAF statement has said.

Meanwhile, CAF has cautioned both Ghana and Gabon to adhere to discipline in the remainder of the ongoing 2021 AFCON tournament depending on how far they go.

“The Disciplinary Board has also issued a stern warning to both teams for their unsportsmanship behaviour after referees’ full time whistle,” the CAF statement on the chaos after the Ghana and Gabon game concludes.