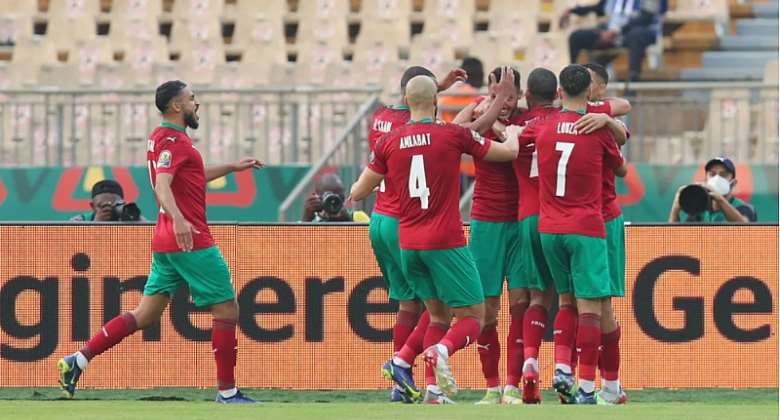 Selim Amallah and Soufiane Chakla scored on either half to secure Morocco a hard-fought 2-0 win over Comoros in Group C.

Boina saved a late Youssef En-Nesyri penalty keep his side the game before substitute Zakaria Aboukhlal secured the victory with a stoppage-time goal book the Atlas Lions place in the knockout stage.

Morocco dominated the match but struggled to find a way past the brilliant Comoros keeper Boina.

Soufiane Boufal provided Morocco width on the right and the winger came close on numerous occasions but Comoros defended well.

PSG defender Hakimi placed in a brilliant low cross into the Comoros box which was not dealt with giving Amallah the time and space to fire in the opening goal.

The striker was played through on goal only lose his footing while rounding the keeper which allowed the islanders to clear their lines.

Morocco continued to dominate while Comoros play on the counter. Boina denied Boufal with a instinctive save inside the six yards before pushing away Hakimi's goal-bound free-kick to the frustration of Vahid Halilhodzic who made changes late on as they look for the second goal.

Substitute En-Nesyri missed a late penalty before Boina pulled another save to deny him from doubling Morocco's lead.

Zakaria Aboukhlal scored the winner with a calm finish to send Morocco to the knockout stage with a game to spare.

"This is a debut for me and I am happy. As you know I come from a country without much of a football culture. It's sad for me because we've been carrying a lot of hearts from our country. We would have liked to leave here with a win. I'd like to go to the professional world, it's a dream that I could see coming true. Of course, I intend to play at the highest level, but time will tell and I leave my life in God's hands."

"We played against an experienced team which had high and low moments. We tried to stop Morocco's opportunities, but they are a fast team in transitions and have a very compact defense. For sure they will have a say in this competition. Let's think about the game against Ghana. We need to find solutions, the last game will be like a final for us. We lost some hope after the VAR decision. I am happy with my goalkeeper and we are here to promote promising players like them."

"We won and naturally we are happy, but we would have liked to do better. It was a difficult game. It would have been nice if we had created more goal-scoring opportunities. I believe we will be more efficient in the next game. I will tell my players to keep hold of the ball and create more chances. We didn't use the many chances we had. I had several players who are recovering from injuries and need more time to be in the desired shape".