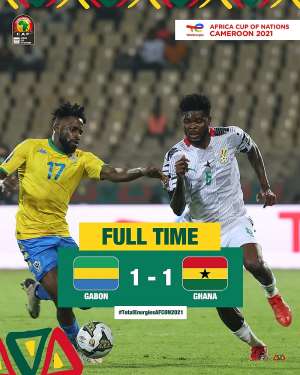 A late equalizer from substitute Jim Allevinah has seen Gabon stopping Ghana from celebrating a first win at the 2021 TotalEnergies Africa Cup of Nations (AFCON) tournament.

The Black Stars last Monday faced off with the Atlas Lions of Morocco in the first Group C game of the tournament.

With that setback, there was pressure on Ghana to return to action today to fight for a win against Round 2 opponent Gabon.

In a game played at the Stade Ahmadou Ahidjo, Andre Ayew scored with a fantastic effort in the 18th minute after an assist from Thomas Partey to shoot Ghana into a deserved lead.

While both teams will push to equalize in the remainder of the first half, neither side managed as the teams went into the break with just the one goal in it.

Later in the second half, it was all action but Ghana held on until the last 10 minutes of the game when pressure from Gabon paid off.

Gabon winger Jim Allevinah who was introduced in the second half scored with a fine left-foot shot to break Ghanaian hearts.

The draw today means Ghana has just a point in Group C and remains 3rd on the log.

Find details of match statistics below:

The Black Stars must now beat their Comoros counterpart in the final group game to stand any chance of progressing to the knockout stage of the 2021 AFCON.

Akufo-Addo doesn't have to advertise his reshuffle — Kyei-Me...
48 minutes ago

Stop threatening ECG Staff, we are losing out livelihood — N...
48 minutes ago