2021 AFCON: You can’t allow yourself to have a bad day against Gabon - Tony Baffoe tells Black Stars 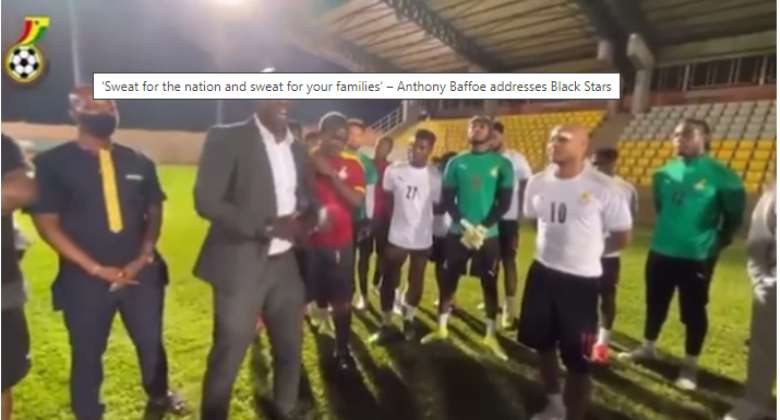 Black Stars lost their opening game 1-0 against Morocco and must win against the Panthers.

Addressing the Black Stars after their last training session ahead of the game against Gabon, Baffoe delivered a rallying message.

He urged the team to show hunger, adding that they must ensure they put themselves on the line for the country and their families.

“You see, you must show hunger, hunger to win. Aubameyang has recovered. I don’t care if Abdul Mumin, Jonathan Mensah, [Alexander] Djiku or Daniel Amartey is going to play in central defence- I don’t care,” the former CAF General Secretary told the players after Thursday’s final training session at the Ahmadou Ahidjo Stadium where the match will be played.

“From day one when you move out of the dressing room when you go into the tunnel, they must feel you, no smiles. It’s no more jokes. Gabon is going to fall tomorrow."

Andre Ayew, who missed training on Wednesday, joined his teammates for the final session on Thursday evening. He is set to start, same as Thomas Partey, Jordan Ayew, Baba Rahman and Daniel Amartey.

Mubarak Wakaso trained separately and is a doubt for the crucial match.

”Captain Dede Ayew, Thomas Partey, [Mubarak] Wakaso, Jordan [Ayew], Baba [Rahman], Jonathan Mensah. Why am I mentioning you? Daniel Amartey- because you are people who have been in the team for long. People like you, you can’t allow yourself to have a bad day, added Baffoe.

Meanwhile, Pierre-Emerick Aubameyang has returned to the squad fo Gabon. The Arsenal forward missed the win over Comoros due to a positive Covid-19 test.