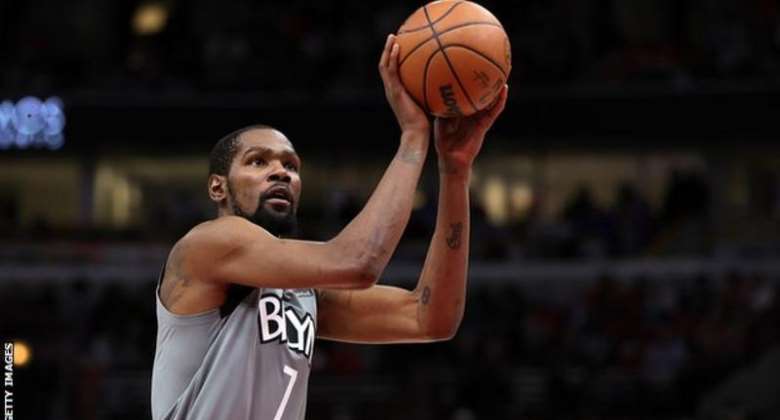 Kevin Durant scored a game-high 27 points for the Nets, who improved their road record to 15-4

James Harden shone with 25 points and 16 assists to help lift the visiting Brooklyn Nets to a comprehensive 138-112 win over the Chicago Bulls.

In a contest featuring the top two teams in the Eastern Conference, Kevin Durant notched a game-high 27 points.

The Bulls remain top of the conference despite defeat, with the Nets second after improving their league-best road record to 15-4.

"These last 10 games we've been up and down," said Harden, who played alongside Durant and Irving in the same game for only the second time this season.

"So we wanted to come out against a really good team who've been playing very, very good basketball and execute and play really good on both ends of the ball.

"I think we did that."
The Miami Heat, third in the Eastern Conference, kept the pressure on the Nets as Tyler Herro came off the bench to score 21 points in a 115-91 win over the Atlanta Hawks.

Lamar Stevens scored a career-high 23 points as the Cleveland Cavaliers ran out surprising 111-91 winners over the Utah Jazz, while RJ Barrett impressed again as the New York Knicks beat the Dallas Mavericks 108-85.

Meanwhile, Jaylen Brown scored 34 points as the Boston Celtics shrugged off their recent road woes with a 119-100 victory over the Indiana Pacers.

The Charlotte Hornets, led by 30 points from Gordon Hayward, beat the Philadelphia 76ers 109-98, ending a 16-game losing streak against them that had stretched back to November 2016.

Kyle Kuzma posted his fifth double-double of the month as the Washington Wizards recorded a 112-106 victory over the Orlando Magic, while the visiting Houston Rockets defeated the San Antonio Spurs 128-124, with Eric Gordon notching 31 points.

Hottest Photo Reports
Catch up with all the political quotes from our politicians.
Advertise here
More from Basketball
ModernGhana Links
I want to use basketball to unite South Sudan, says LA Lakers' Wenyen Gabriel
Celtics great Bill Russell, 11-time NBA champion, dead at 88
There must be focus on the grassroots to grow basketball in Ghana - APO Group chairman advises
TOP STORIES