Chaos, controversy at Cup of Nations as Mali, Gambia and Ivory Coast all win 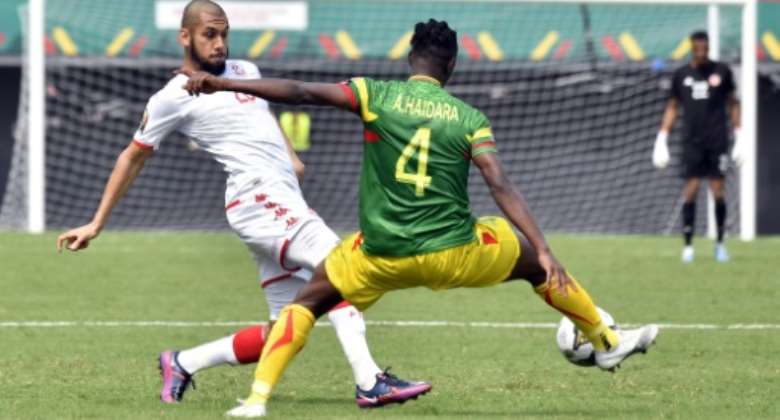 There were chaotic scenes at the Africa Cup of Nations on Wednesday as Mali beat Tunisia in a game marred by controversy when the referee blew the final whistle before the 90 minutes had been played.

The incident completely overshadowed Mali's 1-0 win over one of the title contenders in Limbe, while Gambia and the Ivory Coast also claimed victories by a single goal as the first round of group matches in the competition were completed.

Zambian official Janny Sikazwe signalled the end of the match with the clock showing 89 minutes and 42 seconds, leaving Tunisia furious as they chased the game against their 10-man opponents.

With confusion reigning, Mali coach Mohamed Magassouba was giving his post-match press conference when an official entered the room under the stand to indicate that the game would restart and that three minutes still remained.

Mali returned to the field but the Tunisians did not re-emerge, and so the referee brought the game to a definitive conclusion when the Malians kicked off again.

"His decision is inexplicable. I can't understand how he made his decision and we will see what happens now," Tunisia coach Mondher Kebaier said of the referee.

However, the Tunisian team's refusal to return to the pitch could expose them to further sanctions from the Confederation of African Football.

"He blew for full-time and asked us to go to the dressing room, so the players were in their ice baths and then he asked us to come back out," Kebaier added.

"In 30 years in this business I have never seen anything like it."

Mali were still able to celebrate their victory, which was sealed thanks to an Ibrahima Kone penalty just after half-time in the Group F encounter.

Wahbi Khazri had a chance to equalise for Tunisia in the final quarter of an hour but his spot-kick at the other end was saved by Mali goalkeeper Ibrahim Mounkoro.

Mali had substitute El-Bilal Toure sent off late on, before the chaotic scenes unfolded in the stadium in Limbe, which offers spectacular views down the hill to the Gulf of Guinea.

Games are being played in the town despite separatist unrest in the anglophone region.

The road from economic capital Douala to Limbe was lined with patrolling members of the armed forces, and there were checkpoints at the entrance to the town itself.

An opposition senator was shot dead in the neighbouring anglophone northwest region on Wednesday, in the town of Bamenda.

Cameroon has been torn by violence since October 2017, when militants declared an independent state in the northwest and southwest, home to most of the anglophone minority in the majority French-speaking country.

Both the separatists and government forces have been accused of atrocities in the fighting, which has killed more than 3,000 people and forced over 700,000 to flee their homes.

The refereeing controversy meant kick-off in the day's second game between Gambia and Mauritania in the same stadium was delayed by 45 minutes, and there was more embarrassment for the organisers as the wrong anthem was played three times for the Mauritanian team.

It was Gambia who beat their west African neighbours 1-0 to mark their first ever match at the Cup of Nations in style, with an Ablie Jallow stunner deciding the contest.

In the late game, 2015 champions the Ivory Coast defeated Equatorial Guinea 1-0 in Douala in Group E thanks to a superb early effort by Max-Alain Gradel.

The second round of group matches begins on Thursday as hosts Cameroon take on Ethiopia in Yaounde before Cape Verde play Burkina Faso.

Cameroon, who beat Burkina Faso 2-1 in the opening match on Sunday, are the only team to have scored more than one goal so far at the tournament.

Since then there have been two goalless draws and the remaining nine encounters have all been decided by a single goal.