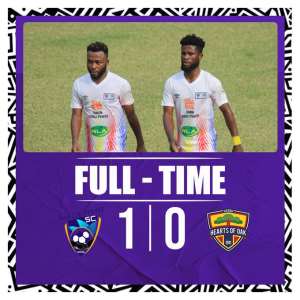 A Vincent Atinga equalizer from the penalty spot has propelled Medeama SC to defeat Hearts of Oak 1-0 in the Ghana Premier League this afternoon.

The team in Tarkwa today hosted the Phobians at the Akoon Park to clear an outstanding match in the 2021/22 Ghanaian top-flight league campaign.

Throughout the game which was supposed to be played on matchday 6, both teams gave it their all and either side could have secured the maximum points.

With Hearts if Oak failing to find the back of the net and ending the match with 10 mean, Medeama SC did the needed in the 81st minute.

Having been awarded a penalty kick, former Hearts of Oak defender Vincent Atinga stepped up to score as he won the match narrowly by a goal to nil for Medeama SC.

Courtesy of today’s victory, the team from Tarkwa are into the top four of the Ghana Premier League table.

Hearts of Oak disappointingly stays in 7th and with one more outstanding match to play against Asante Kotoko in February.