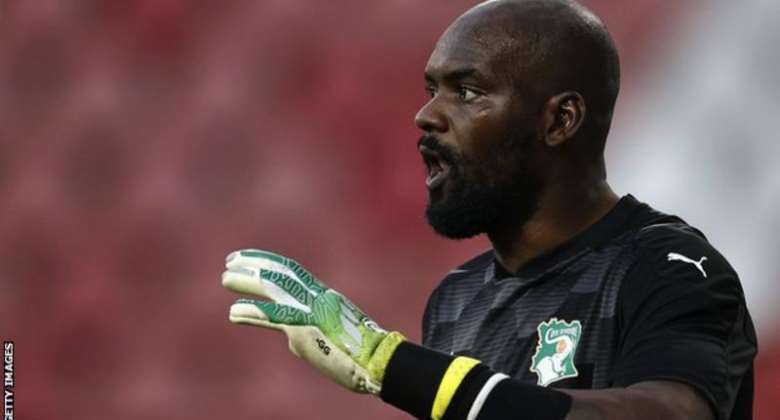 The 33-year-old had been expected to be first choice for his country at the ongoing Africa Cup of Nations in Cameroon, with the Elephants facing Equatorial Guinea in their first game on Wednesday (19:00 GMT).

National team coach Patrice Beaumelle was notified on 26 December that Gbohouo had tested positive for trimetazidine, a heart medication that the World Anti-Doping Agency categorises as a stimulant.

Gbohouo had been named in Ivory Coast's squad for the tournament three days earlier and was subsequently provisionally suspended.

His ban has now been confirmed by Fifa and Gbohouo, who plays his club football in Ethiopia for Wolkite City, has appealed against the ruling.

"We had hope of getting a favourable response from Fifa but yesterday I learned that they were upholding their decision," Beaumelle said.

Beaumelle added that the player, who was part of the 2015 Nations Cup-winning squad, was training alone, had lost weight and "is not sleeping".

Ivory Coast are in Group E alongside holders Algeria, Sierra Leone and the Equatoguineans, with Badra Ali Sangare, Abdoul Karim Cisse and Ira Eliezer Tape their other three keepers in Cameroon.

Beaumelle said, "part of a molecule - a residue" had been found in a sample provided by Gbohouo.

"It's been really difficult for the player," the Frenchman, who was appointed in March 2020, added.

"He's been here since 5 January not knowing if he'll be able to play. He's not eating anymore, he's lost weight, he's not sleeping.

"I hope he stays with us because I think he has an important role to play around the team if he can't be in the team.

"He's a great keeper and an excellent person. It's really hard for him and his family and we are all supporting him because his career isn't finished."

Former TP Mazembe keeper Gbohouo was in goal for the majority of Ivory Coast's triumphant Nations Cup campaign in 2015 but was injured for the final, which was won 9-8 on penalties following a 0-0 draw against West African rivals Ghana.