Kohli and Rabada fight out heavyweight duel in series-deciding Test 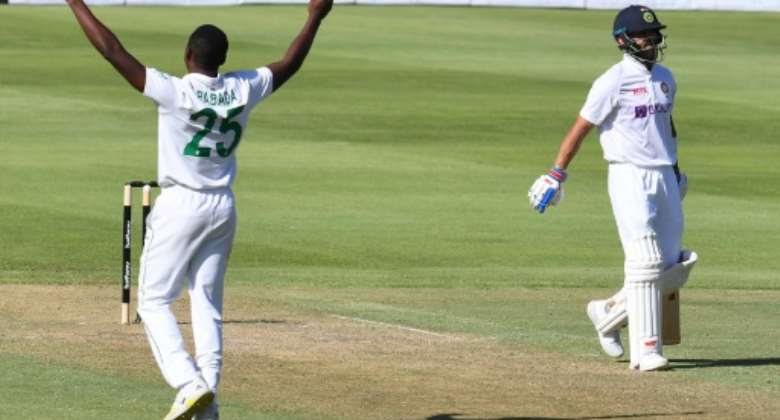 Virat Kohli and Kagiso Rabada fought out a battle of cricketing heavyweights as India and South Africa on the first day of the series-deciding third Test at Newlands on Tuesday.

Kohli provided the chief resistance as South Africa, led by Rabada, bowled India out for 223.

The tourists hit back when Jasprit Bumrah claimed the wicket of South African captain Dean Elgar shortly before the close. South Africa finished the day on 17 for one.

The duel between the star players was the central theme of the day.

Kohli, trying to break a streak of 14 Test matches without a century, made top score of 79, eked out over 201 deliveries.

Rabada, playing in his 50th Test, was South Africa's best bowler with four for 73 and claimed the wicket of India's captain -- but not before Kohli, batting with the tail, was forced to abandon his patient tactics.

"He's a brilliant player. You want to measure yourself against the best players in the world," said Rabada.

"As a batting coach I was never concerned (about his form)," Rathour said. "He was more disciplined today, he was really solid."

But Rathour said he was disappointed with India's overall effort.

"We are below par, we should have scored 60, 70 runs more. They bowled a good spell but there were some soft dismissals."

For an enthralling hour in mid-afternoon Rabada tried his utmost to break through Kohli's defences.

The bowler came close several times, getting the ball to swing away past Kohli's bat and on one occasion inducing an edge that fell short of Aiden Markram at second slip.

But Kohli's determination not to be tempted meant that he left plenty of good deliveries alone.

"I was trying to get the ball to swing away," said Rabada.

"That's the way he has been getting out. I think that's why he was very patient in leaving balls. He batted extremely well.

"The plan was just to bowl line and length," said Rabada, adding with a laugh: "People think we have plans that are so wicked."

'A bit of bounce'

The Indian batsmen struggled after Kohli won the toss and decided to bat under an overcast sky on a well-grassed pitch which Rabada said had "a bit of bounce, a bit of nip and a bit of swing."

Rabada said he thought the match was evenly poised: "Someone will have to bat extremely well," he said.

Kohli was involved in the only significant partnerships of the innings, 62 for the third wicket with Cheteshwar Pujara (43) and 51 for the fifth wicket with Risabh Pant (27).

Kohli contributed only 14 runs off 80 balls to the partnership with Pujara and needed 158 balls to reach his half-century.

But when the bowlers went fractionally too full in length Kohli drove the ball immaculately to hit the majority of his 12 fours -- he also hooked a six off Rabada.

Left-arm fast bowling discovery Marco Jansen again made an important contribution, breaking both half-century partnerships and finishing with three for 55.

The teams are locked at 1-1 in the three-match series after South Africa won the second Test in Johannesburg by seven wickets.

The Indian bowlers had eight overs before the close to get at the South African openers.

Bumrah responded in superb style bowling four maidens and picking up the crucial wicket of Elgar.

The South African captain, who guided his team to victory in Johannesburg last week with a defiant 96 not out, made only three before he was forced onto the back foot and edged Bumrah to Pujara at first slip.