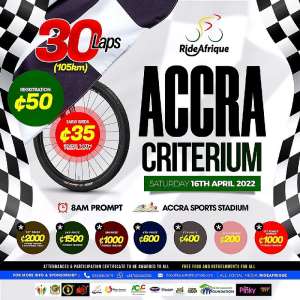 The 2nd edition of the 2022 RideAfrique Accra Criterium has been set for the 16th April, 2022 at the Accra sports stadium.

The 30 laps (105km) race is being organized by one of Ghana's biggest cycling clubs, Africa connect Cycling Club, ACCC.

It is aimed at pushing the image of the sport to greater heights, acknowledging and unearthing potential talents in riders.

The Chief Executive Officer of RideAfrique and president of the Africa Connect Cycling Club, Mr. Richard Agu has indicated readiness to host a successful event.

He stated that all necessary and related equipment have been put in place ahead of the event.

"Arrangements are still ongoing, however we have set the stage and began promotions on social media platforms. All the necessary equipment needed for the event has been shipped to Ghana. We have made deals with a handful of drinks companies to provide refreshments for all the cyclists as well as a deal with Rockz Waakye to provide food for the cyclists and those attending the event. I have also secured radio stations and tv networks to cover the event as well as police personnel who will be on-site for the safety of everyone at the event. There will be a Medical team on site for any emergencies, and an ambulance, which will drive behind the cyclists to support them in case of an emergency," he stated.

He noted that the organizing team is well poised and very optimistic about hosting a successful event. "The response from the cyclists, both local and international, looks great! We are expecting the second edition of Rideafrique Accra Criterium to run smoothly as before, with an even bigger turnout than the first one," he indicated.

According to him, the event is expected to attract over 200 riders across the globe. He, however, commended the Ghana Cycling Federation for the support extended to them in the organization of the event. "Our relationship with the GCF is a mutually beneficial one. We work hand in hand to support each other. They are committed to helping RideAfrique Accra Criterium to achieve the aim of seeing more cyclists in Ghana," he said.

He further revealed that organizing the event has been challenging but attributed the success to the passion of the sport. "We realised that being heard and understood takes time and hard work. Gaining the trust of the media in covering the event was nothing short of hard work. To gain the support of the food and beverage industry was also tough.

"Cycling is a multi-million dollar sport, and Ghana as a country with such talented cyclists, must embrace and give cycling the attention it deserves.

"We believe that events such as RideAfrique will attract a different niche of tourism to Ghana. With this in mind, I am calling on the Ghana Tourist Board to partner with us on this journey to help put cycling in Ghana on the map", he stated.

The deserving winners will take home cash prizes and goodies based on their winning position.

The 1st to 3rd placed cyclists will walk home with GHC 2000, Ghc1500 and Ghc1000 respectively including fitness tracker and a free RideAfrique jersey.

Riders over the age of 50 years to finish first 30 laps will be honoured with GHC1000 plus a well branded RideAfrique Jersey.

Medals and Certificates of participation will also be awarded to all cyclists.