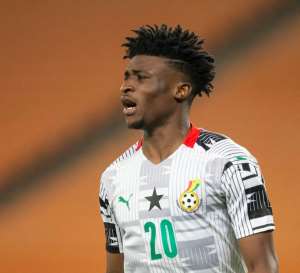 Dutch side, Ajax have agreed to release Mohammed Kudus to join the Black Stars camp for the ongoing 2021 Africa Cup of Nations [AFCON] according to Ghanaian journalist, Saddick Adams.

Kudus is expected to join the Black Stars on Wednesday after getting the green light from his club side.

The report further added that the Ghana Football Association [GFA] is arranging a flight to bring the 20-year-old to the Central African country.

Ajax were initially reluctant to release the attacking midfielder as they claimed Kudus was unfit to play after his recent recovery from a rib injury.

Kudus has not played since suffering the injury in November during Ghana's final game of the 2022 Fifa World Cup qualifiers against South Africa at the Cape Coast Stadium.

However, Milovan Rajevac included Kudus in his final 28-man squad, believing the playmaker will regain fitness and be allowed to play.

Kudus’ imminent arrival is a big boost for the team following Monday’s loss to Morocco in Yaoundé.

Sofiane Boufal’s late goal handed Ghana a rough start, and the Black Stars must improve in the remaining group games.

Kudus is likely to face Gabon on Friday and Comoros on Tuesday, both of which must be won by the Black Stars to avoid a shock first-round exit.

Military in North East Region on stand by for NPP Regional e...
56 minutes ago