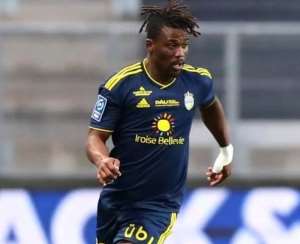 Striker Ebenezer Assifuah has finished the weekend as the top rated Ghana Player Abroad following his outstanding displays for FC Pau in the French Ligue 2.

Last Saturday, the hardworking attacker was in action for his team when the side hosted Rodez in a crucial game of the season.

In a clash that produced four goals, Ebenezer Assifuah provided two assists to ensure FC Pau secured all the three points at the end of the 90 minutes of exciting action.

For his impressing showing, the striker earned a SofaScore rating of 8.4 that puts him above all Ghanaian players that featured for their clubs abroad between January 7 and January 9, 2022.

While the in-form veteran winger Albert Adomah is second on the list, Emmanuel Ntim and Richard Boateng completes the top four.

Other top stars including Thomas Partey, Andre Ayew, Jordan Ayew, and Kamaldeen Sulemana were not considered for the list due to their involvement in the ongoing 2021 TotalEnergies Africa Cup of Nations (AFCON) tournament.

All the four players featured for the Black Stars on Monday when the team suffered a 1-0 defeat to the Atlas Lions of Morocco in the opening Group C game.