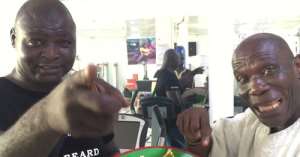 Newly crowned Ghana Heavyweight Champion, Osumanu Haruna with a fight record of 15 fights, 13 wins (8KOs), and 2loses has called out world champions, Anthony Joshua and Tyson Fury for a showdown.

The 41-year-old boxer with a big heart and a big punch spoke to this portal in an exclusive interview at the New Fadama Gym that he is ready to face the best of the world.

According to Haruna, he has come very far in boxing and has learnt a lot.

He noted that he will just demolish African boxers, but his main target is the world’s big boys in the game.

“As for the African boxers, they are no match for me, I want to face Anthony Joshua and Tyson Fury” he said.

He thanked his manager, Mohammed Abdul Samadu for his love and caring nature which has shot him into the limelight after defeating Nii Ofei Dodoo at the Idrowhyt Events Center to clinch the Ghana National title belt.

Osumanu Haruna said meeting the National Chief Imam to bless him has also motivated and inspired him to take his training to a championship level and be focused on the business of boxing.

He advised the youth not to give up if they aim at achieving something positive in life.

Lack of toilet facility in a school causes pregnancy of 15-y...
58 minutes ago