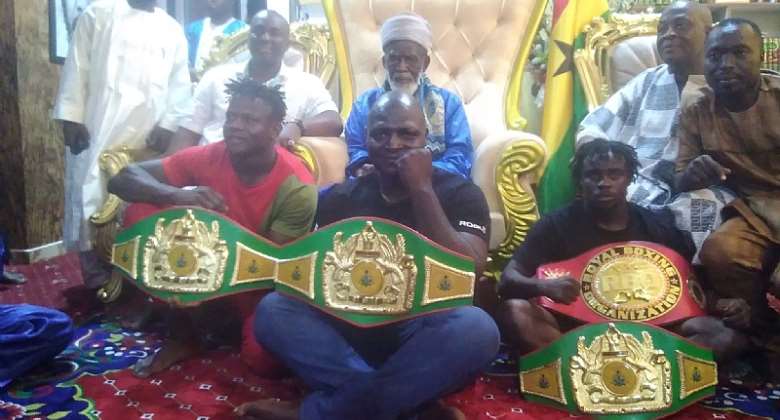 Three national boxing champions from the Zongo community in Ghana have presented their titles to the Chief Imam, Alhaji Osumanu Nuhu Sharubutu at his residence at New Fadama in Accra on Monday.

The National Chief Imam blessed the boxers and advised them to train hard and defend their titles for a long time by being disciplined and dedicated to the sport.

Ghana Heavyweight champion Haruna aka Saabo gave a rendition of his Muslim music to the admiration of all present.

Alhaji Khuzaima Osman, special assistant to the National Chief Imam hailed the trio for making history for Muslims and urged other youth in the Zongos to emulate their achievements.

Alhaji Toffic commended the boxers and informed them that he has been in boxing for over 40 years years and this is the first time that Zongo Community boxers have made him proud by becoming national champions.

He appealed to the Chief Imam and businesses in the Zongo Community to support boxing in Ghana.

Mohammed Abdul Samed, manager of the boxers expressed his joy and hinted that this is the beginning as there is more to come. He revealed that his target is the big titles, especially the world titles. He thanked all Zongo people for their massive support.