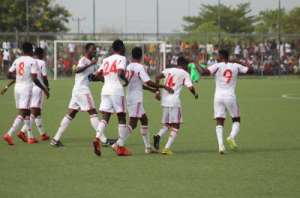 WAFA SC have climbed out of the relegation zone of the Ghana Premier League after defeating struggling Elmina Sharks 2-0 on Sunday afternoon.

The team from Sogakope prior to today’s contest had won just once in their last five matches, raising concern over whether the side can be competitive in the top-flight league this season.

In a matchday 11 contest staged at the Sogakope Red Bull Arena today, WAFA SC set up strong determined to secure the win by all means.

Although the team would be frustrated throughout the first half where they failed to get on the scoresheet, the narrative changed just a minute into the second half.

Striker Justus Torsutsey converted a penalty kick in the 46th minute to give WAFA SC a deserved lead before a Sampson Agyapong equalizer four minutes later powered the home team to condemn Elmina Sharks to a 2-0 defeat at the end of the game.

With today’s win, WAFA SC are out of the relegation zone but Elmina Sharks stays rooted to the bottom of the log.