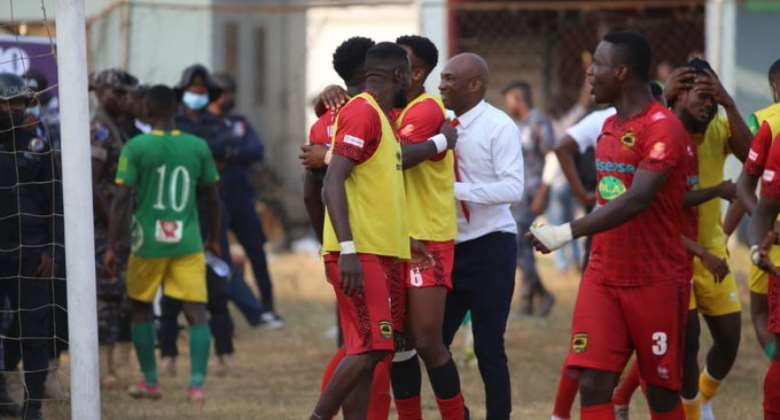 Kumasi Asante Kotoko under Prosper Narteh Ogum have recorded their first away win against Aduana Stars in the 2021/22 Ghana Premier League at the Nana Agyeman Badu Park.

The Porcupine Warriors were hosted by the two times Ghana Premier League in the matchday 11 games on Saturday afternoon.

Hvaing been crashed out of the MTN FA Cup, Kotoko took the lead in the 20th minute through George Mfeguee who headed in from a cross to give the away side the opening goal of the game.

Aduana Stars midfielder Mohammed Abass went down in the box in the 23rd minute but the referee ignored calls for a penalty.

Mudasiru’s long-range effort came off the crossbar to deny Asante Kotoko the second goal in the 34th minute.

Asante Kotoko dominated the first half and ended the break with the deserving lead.

Bright Adjei missed a glorious opportunity in the second half to get the equalizer for Aduana Stars in the 62nd minute.

Former Kotoko striker, Yahaya Mohammed nearly came up with the equalizer in the 67th minute as he failed to direct his header at goal.

Danlad Ibrahim, who was chosen ahead of Razak Abalora came up with a brilliant save to deny Aduana Stars in the 86th minute following a strike from Abass Mohammed.

Midfielder Richmond Lamptey sealed the win for the Porcupine Warriors in the 89th minute following a blunder from the Aduana Stars defense.

Aduana Stars have now suffered back-to-back defeats this season after losing to Medeama away and against Asante Kotoko at home.

The win now leave Asante Kotoko at the top of the league log with 23 points with an outstanding game.

Asante Kotoko will host Ashgold in the matchday 12 games at the Baba Yara Sports Stadium.