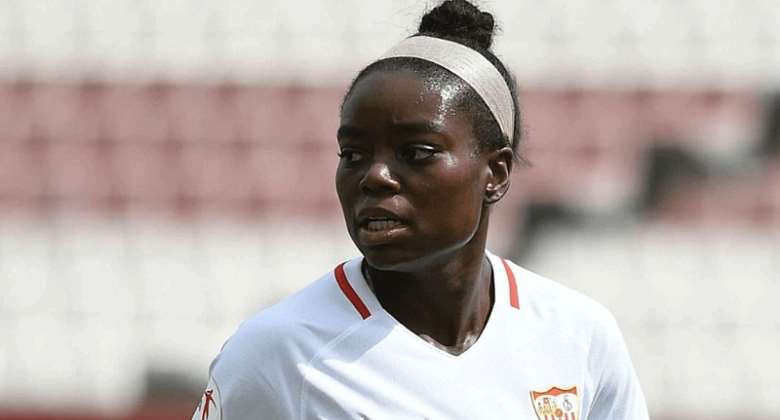 Nigeria forward Toni Payne took her Sevilla goal tally to three in all competitions this season by ending her five-match drought in a 2-1 defeat to Tenerife in the week.

The US-born winger made her first-ever competitive outing with Nigeria in October when they edged Ghana to a 2-1 aggregate win in reaching the second round of the TotalEnergies Africa Women's Cup of Nations qualifiers.

With her latest goal, Payne is the top goalscorer for Sevilla this term with three, one ahead of teammates Elisa del Estal and Jessica Martínez.

She was brought as a second-half substitute and eventually struck at the death but her effort could not rescue her side from a defeat at Estadio Jesús Navas. Despite Sevilla's winless streak extended to five, Payne managed to end the year with a goal.

The Ghanaian teenager maintained her hot streak as Emek Hefer grounded out a 1-0 victory over Hapoel Marmorek. Owusu made it four successive games with a goal as she emerged the heroine of the match, scoring the crucial winner in the 10th minute. She has now taken her goal tally to six in eight games.

The 25-year-old regained her goalscoring touch as Kishronot Hadera thrashed Hapoel Ra'anana 4-1. The Nigerian grabbed a brace, scoring the third and fourth goal of the contest in the 69th and 93rd minutes respectively. So far, the former youth international has now found the net four times in eight outings.

The former Malabo Kings striker registered her second successive goal of the season to give Trabzonspor the lead but the resurgent visitors bounced back in the second half to condemn the hosts to a back-to-back league defeat. The losing streak continues for the Cameroonian as they crumbled 2-1 again, this time at home against Konak Belediyespor.

DR Congo's Ruth Kipoyi and Tunisia's Mariem Houij made their marks as ALG Spor humiliated Ilkadim Belediyespor 9-0. Kipoyi netted the second goal of the match for the hosts in the 23rd minute and Houij made it six in the 52nd minute in the triumph.

Msipa continued with her fine goalscoring start with a brace for Karagumruk as they subdued Sivasspor 3-1. The Zimbabwean forward grabbed her second and third goal of the season in the 47th and 90th minutes respectively. With her latest, she has now scored in two successive matches, taking her goal tally to three for her Turkish side.

Zulu was the heroine of the day for Hakkarigucu as they maintained their hundred per cent start to the season, having snatched a 2-1 victory at Rizespor. The Zambian midfielder scored the second and crucial winning goal to ensure the triumph and also bagged a goal in two successive matches.

Cameroon's Jacquette and South Africa's Madiba were at their best to ensure Fatih Vatan Spor 4-2 victory over Kocaeli Bayan. Jacquette doubled the hosts lead, with her second goal of the season in the 54th minute before Madiba guaranteed the win with her first goal of the season 13 minutes from full time.