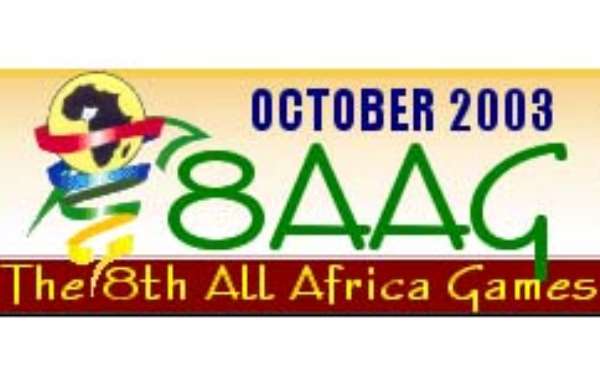 Accra, Oct. 19, GNA - Ghana's contingent, which participated in the just ended All Africa Games in Abuja, Nigeria was given a rousing welcome on their arrival at the Kotoko International Airport on Sunday, October 19.

The contingent touched down at 3:15 and were welcomed by the Mr. Kwodjo Baah-Wiredu Minister of Education Youth and Sports and his deputy Mr Joe Aggrey together with other government officials.

A large number of Ghanaians made up of some youth groups and singing bands who came from various parts of Accra in busses were at the entrance of the arrival lounge singing, drumming and dancing as the 194-man contingent came out of the lounge.

Most of the people who welcomed the team were at the Airport as early as 9:00 am and despite their long stay at the place, waiting for the contingent, they followed them to the Accra Sports Stadium where the Minister and his entourage welcomed the team officially.

Dr Emmanuel Owusu-Ansah, Acting Chief Executive of the National Sports Council (NSC) who was the head of Ghana's contingent said no one gave the Ghanaian contingent any chance to succeed at the events but they have proved all critics wrong.

He said despite the poor sporting facilities in Ghana the sports men and women gave of their best to place 10th out of the 53 countries in the games, with 23 medals.

"We competed with super powers of sports in Africa, who have better facilities but at the end of the day, we emerged as one of the best ten teams at the games." Dr Owusu Ansah noted.

Dr Owusu Ansah said the achievement is a tremendous one and an improvement upon the last games held in South Africa four years ago, where the nation won 15 medals.

According to him the performance at the games shows that the nation has all the needed talents in sports and the only way to get results out of them is to motivate them and put the right facilities at their disposal for them to perform.

Dr Owusu Ansah said though some of the disciplines could not win any medal, the contingent went to the Games as a team and the achievement is for the entire contingent since they succeeded through the collective efforts of all.

Mr Baah Wiredu said the nation is proud of the achievements of the contingent saying after 30 years, the nation has been able to come back from the All Africa Games with more than 20 medals.

He said the best record of the nation in the All Africa Games was in 1973, which the nation won 27 medals, adding that Abuja has been another success for Ghana.

The Minister said, as part of efforts to improve upon this performance in the near future, the Ministry would have monthly meetings with the heads of all associations to seek ways of promoting their various sporting disciplines.

Mr Baah-Wiredu pledged that, the Ministry would reimburse athletes who used their individual monies in preparing for the event and asked them to forward their claims through appropriate procedures.