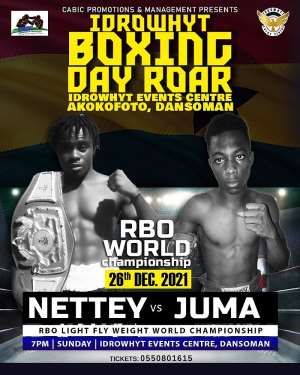 Ghana’s Joseph Akai Nettey (3-0, 3 KOs) will take on Tanzania’s Juma Islam Sule (2-1-2, 1 KO) in the main bout of the Boxing Day Bonanza at the Idrowhyt Events Center at Akukorfoto, Dansoman.

The two boxers will vie for the Royal Boxing Organization (RBO) light-flyweight title. RBO is a sanctioning body based in Luxembourg founded in 2017. They sanction World, Intercontinental and Africa titles.

Ghana’s Patrick Allotey was supposed to take on Kenya’s Rayton Okwiri for his WBO Africa super welterweight title, but it has been rescheduled following an injury sustained by the Ghanaian.

Mr Gideon Oyiadzo Jingles, Marketing Manager and PRO of Cabic Promotions said they are distraught by the sudden twist of events but hope to make amends and give boxing fans a great Boxing Day to remember.

“We are all shocked to wake up to such sad news. Patrick Allotey had a shoulder injury during training and cannot fight. He is currently being treated by our doctors; they will have to declare him fit before we can advice on the way forward. Really sorry about this. Our kind regards to Rayton and the team; we really looked forward to a good fight and a win for Allotey” He said.

But Okwiri who is not convinced said “Allotey is just scared of me, I’m ready for him when he recovers. I’m so disappointed, I hope they’ll compensate me for the expenses I incurred in training,” said Okwiri, a Kenyan boxer who reached the quarter-finals of the 2016 Olympic Games.

In other bouts on the bill, Nii Offei Dodoo will take on Osumanu Haruna in a National Heavyweight Championship over 12 Rounds.

Emmanuel Quaye will clash with Amoak Sampson in a Super Welterweight Contest, while Mathias Sulley Ngua meets Enock Lamptey in a Super Lightweight Contest over 8 Rounds.

All roads lead to the Idrowhyt Center where the package includes entertainment from ace musicians, notably Efe Keys.