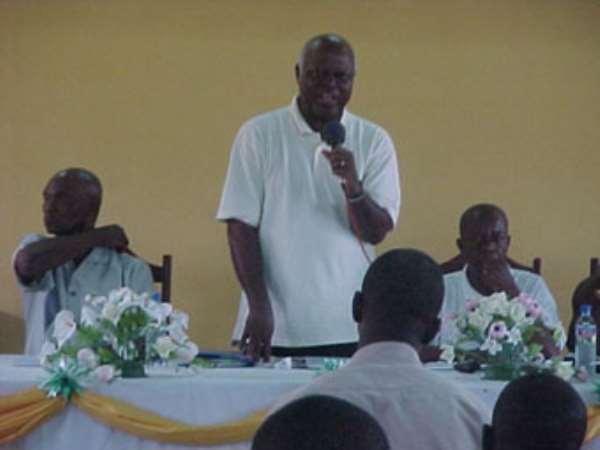 The Chairman of the Ghana Football Association Mr Ben Koufie, in all fairness, does not deserve to be given a second term in office after the apparent abysmal performance of Ghana football.

Since his assumption of office up to date, Ghana football has not seen any significant improvement from the clubs to the national teams and the FA appears to have no antidote to ameliorate the situation.

It is said that the older the wine, the tastier it becomes, but in the case of the FA boss, the better it will be for him to bow out in peace before things get rotten up beyond salvage.

Mr Koufie’s performance has quite disappointed some of the retired old players, coaches and football fans, who advocated an old footballer to bring experience to bear on Ghana football so as to uplift it to an appreciable level, acceptable to all and sundry.

To add salt to injury, countries that are so called minnows in African football have rapidly developed their game such that they now have the vim to match the Black Stars boot for boot and in some cases beating the Stars at our own backyard. It is not even attractive these days for other countries to play international friendly matches with the Stars.

A few years back, countries clamoured to play friendly matches with Ghana because we could offer a good run for their money and that benefited the senior national team in terms of cohesion and exposure and also an income to the FA. Some of the quality friendlies included matches against the Socceroos of Australia, Norway and Holland.

The irony of the situation is that Ghana failed miserably to qualify for CAN 2004 after losing 0-1 to Rwanda for their first appearance just as Zimbabwe, who have just won the COSAFA Castle Cup two weeks ago.

Abedi Ayew Pele must be right to have frowned on the appointment of Ralf Zumdick as the stop-gap coach of the Black Stars for three months.

It was really a stab in the back because as a management member, who has been mandated to look for a coach for the Black Stars and also the manager of all the national teams, he should have been notified of the said ‘’urgent’’ meeting to make an input, and not to be informed later of the decision taken at the meeting.

In spite of that the maestro has pledged his maximum co-operation and support for Zumdick in all areas. This divide-and-rule sort of administration cannot be tolerated.

Ghanaians love football so much that it is often described as the passion of the nation. This assertion is true because a win or a defeat especially by or of the Black Stars, provides the tonic or otherwise for Ghanaians to go about their daily businesses briskly or dejectedly throughout the week.

The years that the GFA boss played and coached the Stars, patriotism was number one and donning the team’s jersey was an honour, so a defeat by an arch rival like the Super Eagles was considered a taboo. Notwithstanding this, the Black Stars accepted a paltry gift of $25,000 and shared it after we had been beaten 0-3 by the Super Eagles at the time we were nursing our wounded pride back home.

Mr Ben Koufie, no doubt, has served this country as a player and a coach (42 years), but the failures of the national teams under his administration have left sour taste in the mouth.