I was nervous at my first Olympic Games - Azamati reveals 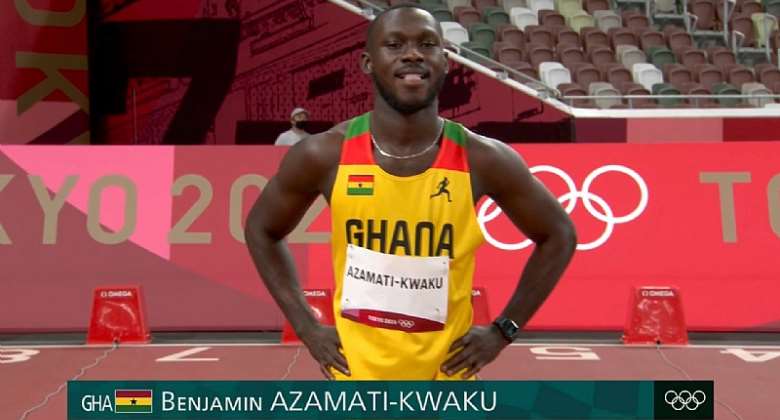 Ghana 100m record holder, Benjamin Azamati has revealed that he was nervous at the Tokyo 2020 Olympic Games.

Speaking on Joy News, he said starting his race with the world's second-fastest man by his side made him psychologically uneasy and instead of concentrating, he lose focus due to inexperience.

"I have learnt a lot, and the Olympic Games has given me a lot of experience," he said.

The 23-year-old clocked 10.13s and finished 4th in the race which was won by Rohan Browning of Australia with Yohan Blake of Jamaica finishing 2nd.

Azamati, a University of Ghana alumni who now attends West Texas A&M University expressed that he feels proud to be an Olympian and looking forward to more successes in Athletics.

"I just don't want to represent and run, but I want to win laurels for myself and my nation" he stressed.

He called for more attention to people who want to do sports in the University, that they should be encouraged with stipends to be able to travel to compete at Athletics meets and the need for specialized training programs as there is the need for trainers on the field and trainers in the gym.

At the Tokyo 2020 Olympic, he did not expect to run a time of 10.13 seconds and also attributed it to lack of proper preparations in terms of the competition at meets to keep his speed, strength and condition.

He was part of Ghana's gold medal-winning quartet in the men's 4x100 metres at the 2019 African Games in Rabat, Morocco, and later participated at the World Athletics Championships in Doha, Qatar.

He said with his firm confidence in determination, discipline and desire he will shine in 2022 focusing on the World Championships in Oregon in the USA and Commonwealth Games in Birmingham in the UK.