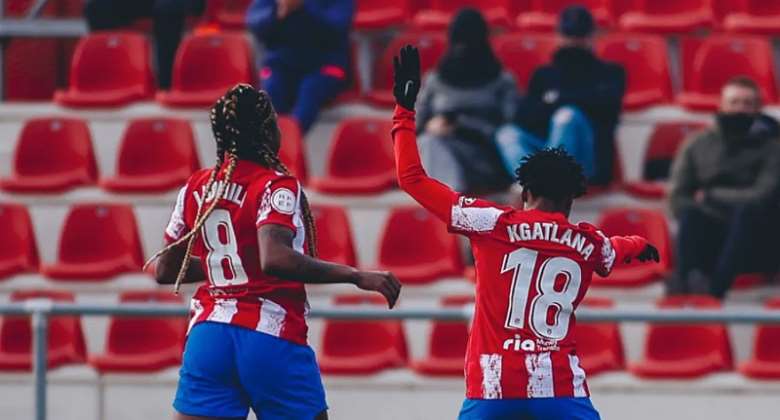 Thembi Kgatlana regained her goalscoring touch by netting as third-placed Atletico Madrid crushed Real Betis 6-1 at the weekend in the Spanish Primera Iberdrola.

After scoring in two consecutive matches, the South African could not find the net in two matches for her club before notching the third goal against Betis.

Kgatlana is the joint second top scorer for Atletico this season with three goals, three behind fellow teammate Deyna Castellanos.

While some are already on holiday, CAFOnline, in this piece reviews top African women performers who shone in the major European leagues at the weekend.

She came on as a second-half substitute as the Las Rojiblancas ran rout, cruising to a comfortable 6-1 victory at Centro Deportivo Wanda. With her side already 4-0 ahead, Kgatlana netted the fifth after just eight minutes on the pitch for her third goal of the season.

The 22-year-old ended a nine-match drought by scoring the opening goal in Las Rojiblancas' comprehensive triumph over Betis. After her 10th minute opener, the Nigerian bagged her first brace in Spanish football, turning in a Leicy Santos' cross for her second of the match before the halftime. She has now scored three times in three starts during this current campaign.

Oshoala returned to training with Barcelona after recovering from a knee injury. She had underwent a successful surgery on ruptured posterior cruciate ligament suffered during Barcelona's 4-0 triumph over Hoffenheim. Her return after a month comes as positive news for Nigeria ahead TotalEnergies Africa Women's Cup of Nations qualifiers tie with Cote d'Ivoire in February.

The Ghanaian teenager scored in her third consecutive match as

Maccabi Emek Hefer were held to 1-1 a draw at home by Ironi Ramat HaSharon in Thursday's Israeli Ligat Al contest. Her 16th minute's opener was her fifth goal in seven matches for Emek Hefer this term.

Akida had a match to remember as she inspired PAOK to a 7-1 thrashing of rivals Elpides Karditsa. The Kenyan helped the hosts race into a 3-0 lead, opening the scoring in the second minute. She went on to bag her second off Vasia Giannaka's cross nine minutes later before completing her treble in the 25th minute. With her latest hat-trick, she ended the first round with eight goals in nine matches.

Kenyan Adam and Zambian Zulu combined superbly well in front of goal to hand Hakkarigucu a 4-0 win against Kayseri Genclerbirligi. The African duo netted a goal each to achieve goalscoring debuts on their maiden appearances in the Turkish topflight opener.

The Cameroonian made a bright start to life in Turkey after her exploits in November's Caf Women's Champions League with Malabo Kings. Despite Bella's goalscoring start for Trabzonspor, they still bowed to a 2-1 loss against Adana Idmanyurduspor.

Jacquette wasted no time in showing off her talent at Fatih Vatan Spor as they beat Altay Izmir 5-2. The Cameroonian opened her goal account on her debut since joining from Eclair de Sa'a.

Nigeria's Abdulkareem contributed a goal and an assist on her maiden appearance for Atasehir as they thrashed Kocaeli Bayan 4-0.

Malian Toure and Zimbabwean Msipa hit the ground running with a goal each for Fatih in a 3-2 triumph over against Rizespor. The African duo showed their brilliance in the attack for Fatih, netting the team's first and second goals respectively to ensure a winning start in their season campaign in Turkey.