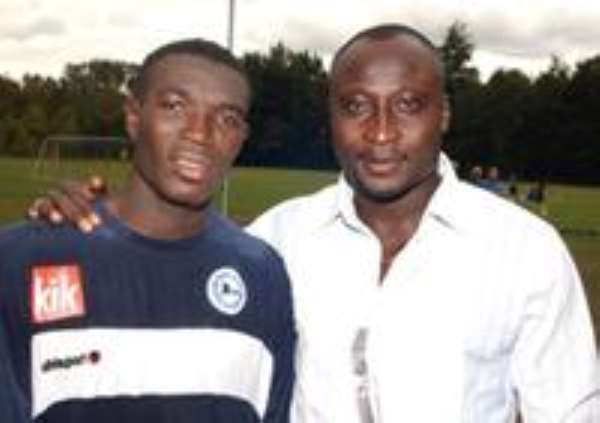 The signing of the 21 year old was confirmed after he successfully completed a 7-day trial with the team. Coach Benno Möhlmann gave the green light for the signing of the Black Stars striker before a year loan deal was agreed with his manager Anthony Yeboah and agent Thomas Heesen. The German team according to the deal will have a 2-year buy out option after the loan deal expires.

Boakye has been given permission to go back to Ghana to complete his work permit with the German Embassy in Accra and is expected to return to the Bielefeld soon.

Boakye’s boots was the epicenter of the eruption of joyous relief that seized his hysterical team-mates, the 20,000 screaming fans in the stadium and the millions going bananas in Ghana after his 2 goals in 2 minutes ensured a 2-1 victory for the Black Stars over their Burkina be counterparts at the 2002 Nations Cup in Mali. Picture: Anthony Yeboah and Boakye during his trials in Germany