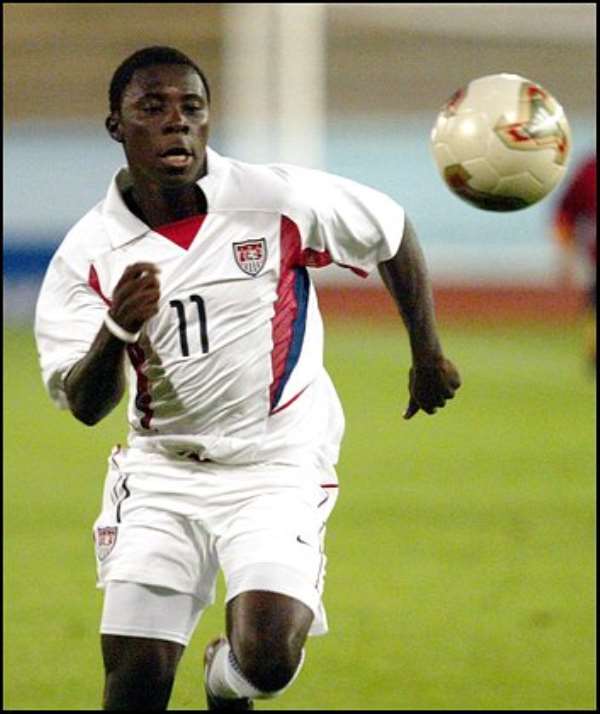 Freddy Adu, the most celebrated teenager in American soccer history, lived up to the hype at the U-17 World Cup Aug. 13-30 in Finland. The Facts Born: June 2, 1989 in Tema, Ghana. Hometown: Potomac, Md. Height: 5-8. Weight: 150. Club: Bethesda International. International: U.S. under-17 national team. Favorites ... Soccer player: Zinedine Zidane. Soccer teams: Real Madrid, Manchester United. Non-soccer athlete: Kobe Bryant. Non-soccer team: Los Angeles Lakers. Other sports you enjoy: Golf, basketball, ping-pong. Hobbies: Going to the mall, being around friends and family. Music: Rap, Hip Hop. Musical artist: Eminem (my favorite), 50 Cent, Nas, Jay-Z. Movie: ''Lord of the Rings.'' Actor: Denzel Washington. Actress: Halle Berry. TV show: ''The Simpsons.'' Meal: Jollof Rice - chicken, lamb or beef with rice in a stew. Dessert: Vanilla ice cream. School subject: U.S. history. Last book read: ''Tale of Two Cities'' by Charles Dickens. People Family: Family is the most important thing to me because they are and have always been my biggest supporters and remind me to just have fun and not worry about everything else. Friends: When I'm around my friends, I can act like just a kid and not worry about the attention. Most influential coach: U-17 coach John Ellinger. Who makes you laugh: Eddie Murphy ... But if you mean one of my teammates, Chase Wileman, because everything he does is straight comedy, 24/7! Four famous or historical people you'd like to invite to a dinner party: Pele, Tiger Woods, Halle Berry and Kobe Bryant. Memories ... Childhood Soccer: The first time I put on a pair of cleats I was about 6 years old. I started kicking a soccer ball with them. It felt so funny and uncomfortable because I had never worn a pair. I was playing with a bunch of older kids - maybe two or three years older - and I just wasn't playing well, I don't really know if it was the cleats or not, so I took them off and played barefoot. I ended up scoring the game-winning goal. Missing Ghana: The way everyone goes outside and plays soccer in the street ... I miss just being able to walk where ever I want ... the city life is so easy going. Obtaining U.S. citizenship: I was very, very, very excited. I had been waiting for that for two years, and it allowed me to finally represent the U.S. in a way not too many people can. First World Cup: I remember the '94 World Cup, but at 5 years old it wasn't much to me. But my first real understanding of the World Cup was in '98. I totally remember France beating Brazil and shocking the world ... winning 3-0! 2002 World Cup: I did whatever it took to get up early and watch the games when they were live. I loved the underdog teams coming on strong and beating the top teams, but most of all seeing the U.S. play in the quarterfinal game against Germany. On the field ... First Cleats: Nike. Current Cleats: Nike Total 90 II. Referees: I get along with referees real well because I'm always about an inch from them on the ground when they are pointing to the space where I was fouled. But I get into it with refs just like any other player when I don't feel a call went my way. Would you ever want to be a referee: No. The best part about being in the U-17 residency program: Being with the best kids in the age group in the country and being able to train with them everyday. It's always a challenge. But the best part is making the friendships with these kids from all over the country. The toughest part about being in the residency program: Being away from home. Before a game: Eminem pumps me up. And then I say my prayers. After a game: Go back to my room and analyze the game in my head so that I'll know what I need to work on the next day in practice. Strengths as a player: Holding the ball, going at defenders and creating space for my teammates, and finishing. Where to improve: Every aspect of my game. I'm not perfect, so I'll always look to get better overall.