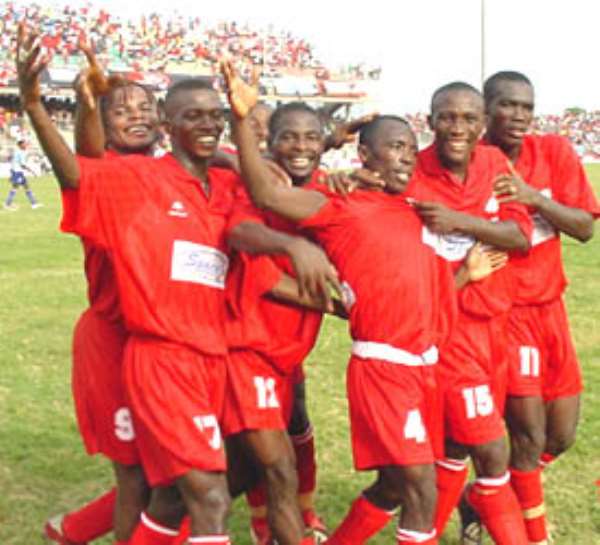 Accra, Aug 14, - GNA - League Leaders, Kumasi Asante Kotoko on Thursday held on to their one point lead on the league table by inflicting a 3-1 defeat on Liberty Professionals at the Accra Sports Stadium. Liberty, who until recently have had some good runs in the league, had their plight worsened as they were beaten 3-0 by Arsenals last Sunday in an away match before suffering this defeat which sees them conceding five goals in two matches. The match, contrary to expectation, was dominated by the visitors who had their first goal in the 1st minute when Nana Arhin Duah capitalised on a defensive blunder to slot in from close range. Following the early goal which unsettled Liberty, Kotoko maintained pressure on the hosts but could score due to interceptions from the Liberty defence and lack of imagination on the part of their attackers anytime they moved up-front. Liberty begin to find their rhythm in the game after 20 minutes of dominance by Kotoko and had their brightest chance in the 37th minute. Youthful striker, Asamoah Gyan set up Alfred Nii Larbi for a possible equaliser but his shot rolled across the goal area without entering the net. The game however experienced some unfortunate situations in the first half as coach Abdul Karim Razak was forced to replace two of his defenders Daniel Yeboah and Godfred Yeboah with Daniel Acquah and Moses Tetteh respectively due to injuries. Coach Silas Tetteh of Liberty was also compelled to substitute his skipper Addoquaye Pappoe with Nketia Kwabena when the former was hit on the head with a strange object from a section of the crowd.
Kotoko had their second goal before the close of the half through Micheal Asante who had to play the game with a bandaged head following a cut he sustained in a clash with an opponent. Asante outwitted Essuman Mustapha in the Liberty defence before squeezing the ball into the net in the 42nd minute.
Liberty on resumption seemed to have recovered from imminent annihilation and once again put their acts together and made some efforts at getting a goal with Asamoah Gyan being the key man, but his efforts found no support from his colleagues up-front.
Kotoko responded with a swift attack in the 54th minute and stormed the area of Liberty with controversial Charles Taylor, who though did not perform extraordinarily, had every touch of his being applauded by the fans at the stadium.
Taylor set the stadium alive in the 57th minute after Keeper Kotei Blankson had failed to make a first time save of his thunderbolt free kick and Aziz Ansah, the skipper of day stabbed the rebound in for Kotoko's third goal.
Liberty failed to come in strongly again till the 90th minute when the efforts Asamoah Gyan and substitute William Tierro forced a handball from the a defender of Kotoko in the box and referee Buckman Yanney whistled for a penalty.
Gyan converted the penalty to give his side a consolation goal.