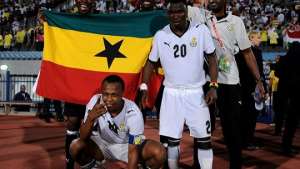 Former Ghana defender, Daniel Quaye has disclosed that Andre Ayew was named the captain of the Black Satellites team just to give him a big market value.

Ayew, who currently plays his club football for Qatari side, Al Sadd, led Ghana's U-20 side to win the 2009 FIFA World Cup in Egypt, becoming the only African country to clinch the historic trophy.

Speaking in an interview, Dan Quaye, a former Hearts of Oak star indicated that the U-20 team was already built so Ayew was only appointed as captain to give him a big market value since he was playing for French Ligue 1 side Olympic Marseille.

“Andre Ayew is a good player but I can tell you the U-20 team groomed by Sellas Tetteh was a complete team even before he was invited," he said.

“Ayew was made the captain just to give him a big market because he was playing for Marseille at the time and at the tournament, he didn’t disappoint,” he added.