I cannot support you to win Ghana Premier League ahead of Asante Kotoko - Prez. Akufo Addo tells Hearts of Oak 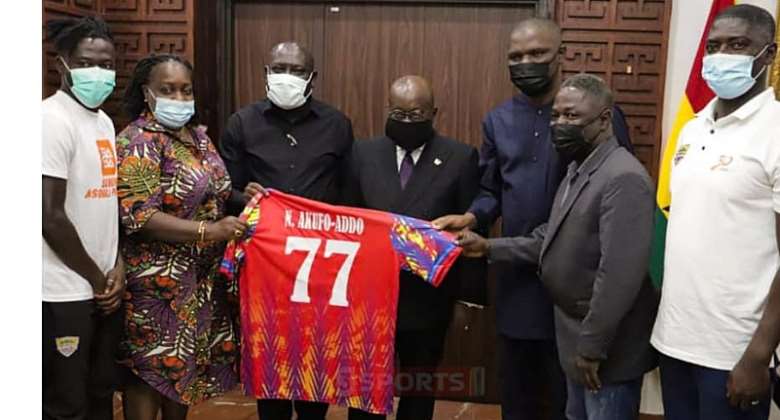 President Nana Akufo-Addo has opened up on his support for Asante Kotoko, backing the Reds to emerge as champions of the 2021/22 campaign ahead of Hearts of Oak.

Akufo Addo opened up on his support for the Porcupine Warriors following a visit by Hearts of Oak to the Jubilee House ahead of their CAF Confederations Cup game against JS Saoura.

Led by Vincent Sowah Odotei, other members of the delegation were Ivy Mills, Alhaji Imoro Briamah and the team’s manager Samuel Boadu.

The President was, however, quick to add that he will always support Hearts of Oak when they are playing in Africa and gave the team GHc1 million for their continental campaign.

“Unfortunately, I will not be here on Sunday because I have official business outside the country but I will be with you in spirit but I will donate to your campaign the same way I supported Asante Kotoko when they were going to Africa,” Akufo-Addo said.

“I wish you more success in the competition but as far as the league is concerned, I cannot say that I wish you well because the people in Kumasi will be very upset if I say that but nevertheless, I support your journey in Africa.”

Meanwhile, Hearts of Oak’s hopes of reaching the group stages of the CAF Confederations Cup were dashed when they lost 4-0 to JS Saoura on Sunday in the second leg in Algeria.

The Phobians defeated their opponents 2-0 in Accra, but their heavy defeat in Algeria saw them exit the tournament by a 4-2 aggregate scoreline.

Hearts of Oak are however yet to win a game in the ongoing Ghana Premier League.