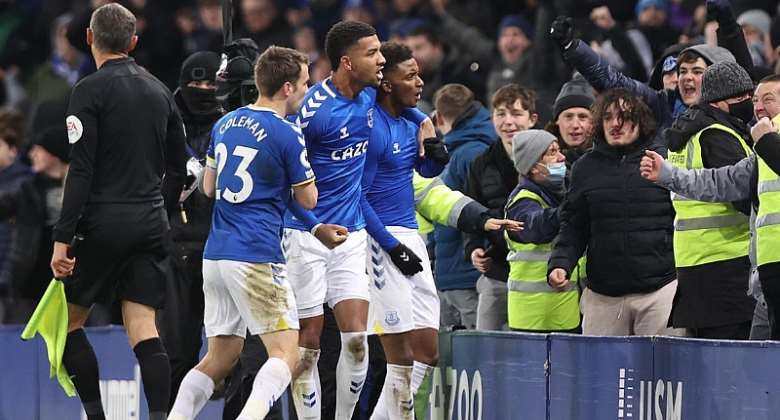 Demarai Gray's vicious strike in injury-time hands Everton a much-needed three points as the hosts come from behind to beat Arsenal 2-1 to end their eight-game winless run.

In a drab first half, Odegaard gave Arsenal a surprise lead moments just before half-time after Richarlison had a header into the net ruled out by VAR for offside.

The Brazilian again thought he had scored the equaliser in the 58th minute, but he was deemed to be offside by VAR as he slotted his shot into the bottom corner.

And it would be third time lucky for Richarlison as he headed in a Gray strike on the rebound in the 79th minute to grab Everton the draw.

Everton then got the winner they desperately needed in injury-time thanks to Gray who spectacularly rifled his venomous shot into the top corner.

Victory for Everton sees Rafael Benitez's side move up into 12th on 18 points. For Arsenal, their third loss away from home in the Premier League keeps them in seventh on 23 points. The match began in lukewarm fashion with a 27th-minute walk out from the Everton fans to protest Farhad Moshiri's ownership proving equally tepid.

But a minute later there was controversy when Ben Godfrey, playing at left-back, planted his right boot into Takehiro Tomiyasu's face yet VAR ruled it was accidental.

Richarlison had the ball in the net in the 43rd minute as he headed in a fine cross from Andros Townsend at a free-kick, but it was chalked off by VAR as the Brazilian was just offside.

And although Arsenal had done little to test the Everton goal, the visitors took a surprise lead on the stroke of half-time with Odegaard sidefoot-volleying in Kieran Tierney's pinpoint cross into the bottom corner for his third Premier League goal of the season.

Richarlison was left frustrated again when he thought he had equalised just before the hour mark with a low shot beyond Aaron Ramsdale, only for VAR to rule out his fine finish as he was inches offside.

Everton continued to push for an equaliser and Richarlison finally had a goal given the green light. Gray's curled effort smashed off the crossbar and he nodded in the rebound with a perfectly weighted looping header.

Substitute Eddie Nketiah squandered a glorious chance to win it in the 83rd minute as his far-post header from point-blank range crashed off the post. He would be made to pay for his error as Gray found a last-gasp winner in injury-time, cutting in onto his right boot and fired into the top corner.

Pierre-Emerick Aubameyang missed a gilt-edge chance to equalise in the final seconds of the match, sliding his shot wide of Jordan Pickford's right post to ensure Everton sealed a hugely important three points.