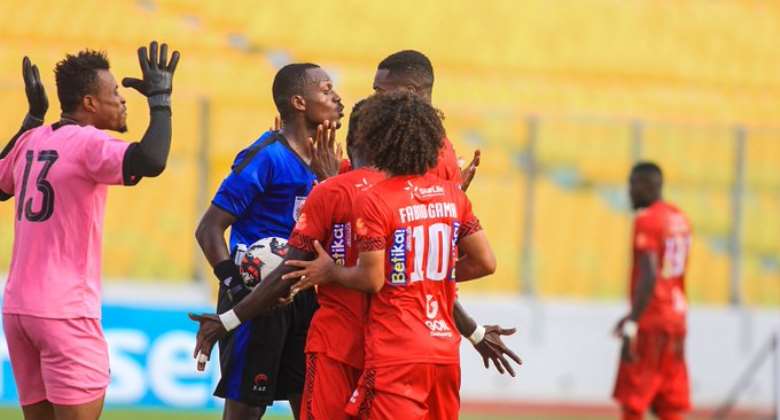 Asante Kotoko have formally filed a complaint against referee Julian Nunoo following their defeat to King Faisal over the weekend.

The Porcupine Warriors club hosted the Kumasi rivals at the Baba Yara Sports Stadium on Sunday for a matchday 6 encounter of the ongoing 2021/22 Ghana Premier League season.

At the end of an exciting contest, King Faisal recorded a resounding 3-2 win to pick all three points against Kotoko at their own turf.

Unimpressed with the performance of referee Julian Nunoo, Asante Kotoko have announced today that a complaint has been filed to the Ghana Football Association (GFA).

“𝑪𝑳𝑼𝑩 𝑵𝑶𝑻𝑰𝑪𝑬. We have lodged a formal complaint with the @ghanafaofficial against the referees who officiated our #GPL2122 matchday-6 game against King Faisal in Kumasi last Sunday,” an official post on the Twitter page of Asante Kotoko has said.

Courtesy of the defeat to King Faisal, Asante Kotoko are no longer top of the Ghana Premier League table.

The reds are second but on the same points [13] as the league leaders, now King Faisal.

You have collapse the economy, now you want us to pay E-Levy...
15 minutes ago