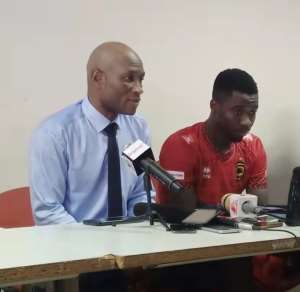 Asante Kotoko coach, Prosper Narteh Ogum has opened on why his side lost to city rivals, King Faisal.

The Porcupine Warriors after being held by Karela United in the matchday five games were hoping to return to winning ways against the Inshla Boys in the matchday six games.

Kotoko hosted Faisal at the Baba Yara Sports Stadium, a game that was entertaining.

Zubeiru Ibrahim bagged a hat trick before Cameroonian international, George Mfegue scored a brace to end the game 3-2 in favour of Nurudeen Amadu's side.

Speaking in a post-match interview, Prosper Narteh has disclosed they dominated the game but King Faisal had the goals due to the lack of patience on their side.

"I am impressed with the players, we outplayed King Faisal, but they scored the goals. Lack of patience cost us.

He also lauded the supporters for their supporters despite the defeat.

“Support was amazing and even when we were down, the supporters never stopped singing and urging us on, chanting slogans of the Porcupines and doing everything to aid us. We are grateful to them," he added.

Asante Kotoko will be hosted by rivals, Hearts of Oak in the matchday seven games at the Accra Sports Stadium.