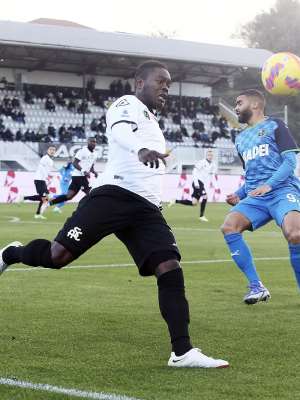 Black Stars forward, Emmanuel Gyasi has made it into the top 10 highest-rated Ghanaian players abroad list after his top performance for Spezia Calcio in the Italian Serie A.

The exciting attacker was in action for his team on Sunday where he put up an inspiring performance to help the side secure a point in the game against US Sassuolo.

On the matchday, Emmanuel Gyasi scored with a brilliant effort in the 48th minute after receiving a pass from strike M’Bala Nzola.

In a game where the winger lasted 76 minutes of the action, he bowed out with a rating of 7.3.

The score is enough to give him a place amongst the top 10 highest-rated Ghanaian players abroad for the weekend covering the period between December 3 and December 5.

Other players that made the list include Emmanuel Hackman, Samuel Mensah, Emmanuel Ntim, and Isaac Sackey.

Although Jordan Ayew is not included in the list, he impressed for his Crystal Palace outfit on Sunday afternoon during the team’s narrow 1-0 defeat to Manchester United in the English Premier League.