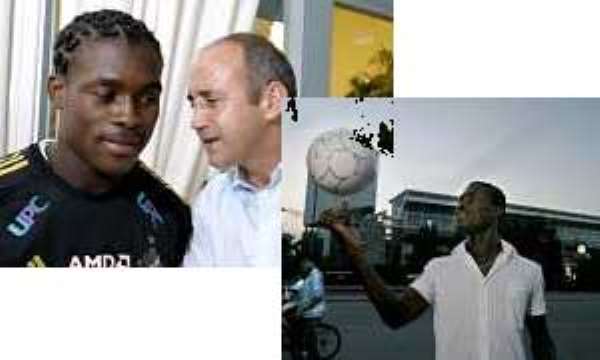 Geek Side, PanathinAIKos sold Derek Boateng to Swedish club AIK Solna for 500.000 euro. The 20-year-old Ghanaian midfielder was out of Panathinaikos coach Intzhak Shum's plans and Pana wanted to loan the player to Kalithea in order to create a non-EU player space for acquiring Croat Giovanni Rosso. However, Derek Boateng refused and also for Panathinaikos it is too late to capture a new player since the summer 2003 transfer window closed in Greece on 31 July. Boateng signed a three-year contract with AIK Solna worth 350.000 euro per year. Details of Derek's move to AIK As reported yesterday, Derek has now signed for AIK and he has been presented to the press. I attach pictures (Derek with coach Money and with ball outside Rasunda Stadium, AIK's homegrounds. At the press conference AIK's English coach, Richard Money (pictuerd with Boateng) said: " I can't believe that we could get Derek and I believe he is going to be the best player in the league. I've seen videos of him against Real Madrid and Manchester United and this is a really, really big catch for us". This is because he was near a contract with Middlesbrough. Latest and confirmed reports put the transfer sum for Derek Boateng at 4.6 million Swedish crowns (USD 560,000 or € 500,000) and according to AIK's Managing Director, Sanny Aslund, Derek Boateng is going to be one of the best paid players in the Swedish league (Allsvenskan). He gets the number 6 jersey.
Latest report on story in Aftonbladet:
http://www.aftonbladet.se/vss/sport/story/0,2789,339525,00.html
http://www.aftonbladet.se/vss/sport/story/0,2789,339518,00.html
In one of the reports, they have the story when during the Under 20 World Cup in Argentina, Maradona said Derek will become one of the future stars.