Things The President Will Be Told 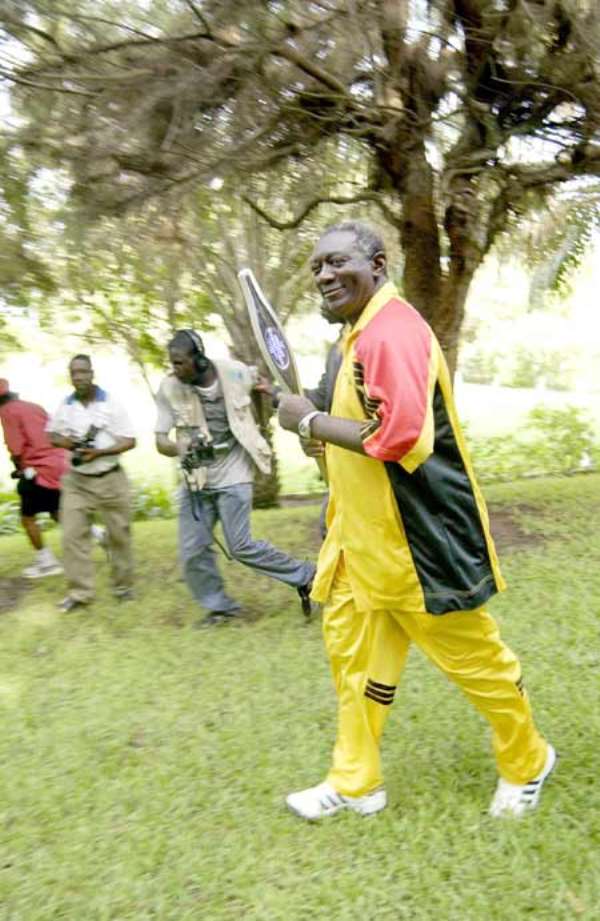 Tonight at the banquet hall of the State House, the shakers and movers of Ghana sports will perform the annual ritual of putting the country's sports under the microscope.

Amid the clinking of glasses and cutlery, and against a background of an assortment of sartorial tastes, the audience at the 28th SWAG Awards Night will eagerly wait to hear something about a new direction for Ghana sports.

The distinguished audience will be all too keyed up for words of inspiration from His Excellency, President J.A. Kufuor, who is the Guest of Honour. With his background as a former club administrator — a board chairman of Asante Kotoko — the President must be too conversant with the declining standards of Ghana sports.

Of course, whatever reassuring words will be forthcoming from the President will predictably be preceded by some verbal salvoes from the SWAG President, Ebo Quansah.

And one person who will see himself in a reversal of places is former SWAG President, Joe Aggrey, now a Deputy Minister of Youth, Education and Sports. Maybe for the first time since he assumed the mantle of this country's leadership, President Kufuor will be told in plain language the sorry state of Ghana sports today.

Even if outside his prepared speech, Ghanaians will like to hear words to the effect that something positive is going to be done to put the brakes on the frightening decline in Ghana Sports.

It is understandable that, to a man, Ghanaians are downcast and beside themselves with rage that their country, once the pace-setter in sports, particularly football, boxing and athletics is slowly, but surely, being reduced to a reference point in history.

Today our football, the source of our phenomenal pride in the past, has become so ordinary that countries like Uganda, Rwanda and Kenya can look us in the face and hand us humiliating defeats.

It's all because while we preferred indulgence in revelry of past glory to planning ahead, these countries owned up to their near-zero profile in football and committed themselves to the basic learning of the game. The result is that they have caught up with us, and we are in danger of being trapped in their shadows if we don't plan well in the coming years.

Like football, which is regarded as the passion of the nation, boxing and athletics too have been through some really bad times, culminating in the manifestation of mediocrity in our performance from time to time.

For a country that has produced the likes of Roy Ankrah, Klutei Robertson, Joe Tetteh, D. K. Poison, Azumah Nelson, Ike Quartey and Nana Yaw Konadu, our boxing profile is so high that we shouldn't be encumbered in the search for potential world champions.

But the picture today is one of having slipped into ordinary depths incompatible with our former enviable status. This has been brought on by years of neglect, evidence of which is the lack of facilities, and the tragic mistake of taking our greatness for granted.

In spite of what boxing has done for us, and can do for us by way of placing Ghana on the world map and providing good job for the youth with the requisite talent, this country can't boast of a single gymnasium worth its name.

The ability of D.K. Poison, Azumah Nelson and Ike Quartey to make such profound impact on world boxing, in spite of all the handicaps, shouldn't lure anyone into thinking that world champions will continue to be produced in this country.

Legends like Azumah and Poison who, the odds notwithstanding, have the capacity to propel themselves to the apex of boxing glory appear on the scene once in a long time.

Shocked by the damning picture of how Bukom, the cradle of Ghana boxing, can't boast of even one gymnasium, former Youth and Sports Minister, Edward Osei Kwaku, during a visit to the place pledged to get one built for the people.

I hope the pledge hasn't been relegated to the backrow of politics along with the former minister. Bukom deserves a modern gymnasium and other requisite facilities for what it has done, and will continue to do for Ghana boxing.

As a matter of fact, other parts of the country also deserve the facilities because of the interest shown by the youth nationwide in the sport, and the fact that potential champions can now be unearthed all over the country.

We need to optimise our bilateral relation with Cuba as one sure way of taking our boxing back to the level it once enviably occupied.

The problems buffeting athletics are similar to those of football and boxing, and it is hoped whatever presidential initiative will be unveiled will be all-inclusive to radiate optimism.

The august audience at the banquet hall will surely have so much to relish tonight, but one event that is likely to overshadow many others will be the presence of Charles Taylor, the player at the centre of the longest-running transfer controversy in Ghana's football history.

As the recipient of the Footballer of the Year award and joint recipient of the goal-king award, Taylor will carry his own attraction to the ceremony, and the audience, not least His Excellency the President, will have a close-up view of it all.