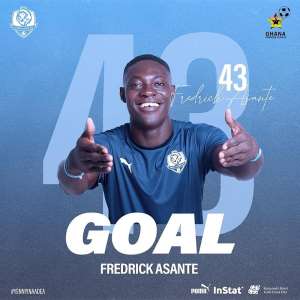 Accra Lions on Saturday afternoon laboured to record a narrow win over Eleven Wonders in the Ghana Premier League thanks to an injury-time strike from Frederick Asante.

The league’s newcomers today hosted the team from Techiman at the Accra Sports Stadium to battle it out for points on matchday 6 of the ongoing 2021/2022 season.

Although Accra Lions had their struggles in the first half, the team stayed compact to keep the opponent at bay.

On the back of a goalless draw at the end of the first half, both teams returned from the dressing room poised to equalize to run away with the maximum points.

At the end of an exciting contest, it is Accra Lions that celebrated at the blast of the final whistle.

The team emerged with a 1-0 win courtesy of a fantastic goal from Frederick Asante that came in the 92nd minute of the game.

The crucial three points keep Accra Lions clear off the relegation zone and a chance to push to get into the top six of the league table before the first round comes to a close.