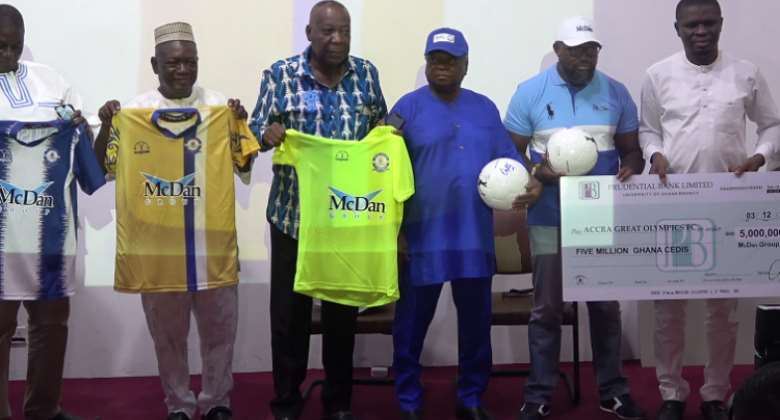 The deal which was signed at a brief ceremony in Accra on Friday, 3rd December, 2021 is valued at $270,000 per annum with an investment package.

Mr. Daniel Mckorley, the Chief Executive Officer of the McDan group in an interview with the media stated that the expectations of the deal will be met as signed.

He urged the Accra Great Olympics family not to take the name of the group, McDan for granted.

"I expect Accra Great Olympics not to disgrace me, I expect them to perform and also not to take the brand name for granted, the sponsor and the sponsorship package," he said.

"I don't expect them to take the brand for granted. The brand alone has a lot of respect and now that we sponsor them, they must behave like McDan," he added.

The Minister for Youth and Sports, Hon. Mustapha Yusif in his remarks acknowledged Robert Coleman for the good works executed to ensure local clubs benefits through the support of corporate entities.

He expressed his gratitude to the group CEO Daniel Mckorley, for the kind gesture and investing in sports development and infrastructure.

He, however, called on all other corporate entities to emulate the gesture from McDan.

Mr. Robert Coleman, the Chief Executive Officer of the Wembley constructions, who initiated and brokered the deal between the two parties pledged by putting in efforts to secure similar support for local clubs.

"This is just the beginning for Ghanaian clubs, we are working tirelessly to ensure other clubs also benefits from such huge and life-changing sponsorships," he disclosed.

Accra Great Olympics are expected to get $100,000 with the rest subject to seasonal performance.

A whopping $20,000 will be up for grabs if they finish within the top four at the end of the season.

Also, a qualification to the CAF Champions league will earn Olympics a $10 million investment package from the McDan group.